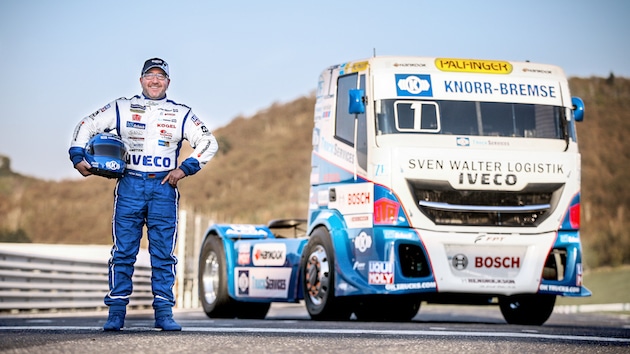 As the fourth round of the FIA European Truck Racing Championship 2019 at the Nürburgring approaches, Knorr-Bremse and Team Hahn Racing have announced that they are prolonging their collaboration.

Knorr-Bremse and Knorr- Bremse TruckServices, the aftermarket unit of Knorr-Bremse Commercial Vehicle Systems, are to remain official sponsors of Hahn Racing Team until 2022.

“We are very proud of our 16-year partnership with Jochen Hahn and his team and look forward to continuing to play our part in the team’s success as official sponsor and technology partner,” said Bernd Spies, Chairman of the Management Board of Knorr-Bremse Commercial Vehicle Systems. “Truck racing provides us with the opportunity to test standard products under the very toughest conditions. We wish Jochen Hahn and his entire team every success for the rest of the season.”

The most recent success for Team Hahn Racing and their Iveco RaceTruck with its Knorr-Bremse brakes and steering came at the season’s third event at the Slovakiaring, where Jochen Hahn was able to extend his championship lead. Hahn has been leading the title race since only the second race weekend of the season at the Hungaroring.

“I’m very pleased with the current position after the third race weekend in Slovakia,” said Jochen Hahn, who last year claimed his fifth European Truck Racing title. “After what has been a successful start to the season, we’re now fully focused on the upcoming 34th Truck Grand Prix at the Nürburgring. Together with the experts from Knorr-Bremse we have prepared the ground for our success and this coming weekend we’ll be looking to take a further step toward our next European championship title.”

As main sponsor and a technology partner in terms of vehicle optimisation, Knorr-Bremse provides an extensive range of products for the Iveco Race Truck. Along with the pneumatic braking system complete with air supply system, this also includes a steering system from Knorr-Bremse SteeringSystems. In addition, Knorr-Bremse TruckServices supplies Team Hahn Racing with a range of replacement parts.