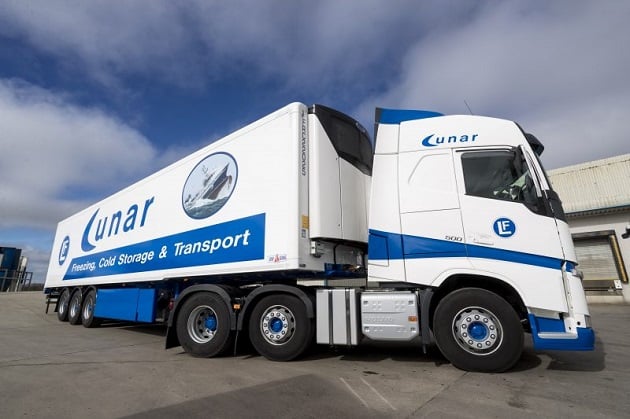 Mounted to a 13.6-metre Gray & Adams trailer built at the company’s plant in nearby Fraserburgh, the trailer will transport fresh fish landed in Peterhead to Germany, Holland and throughout the UK.

“We’ve had many years of fantastic service from Carrier Transicold and the chance to be the first in Scotland to introduce their next-generation system was one we didn’t want to miss,” said Lunar Freezing Engineering Manager, Jim Bruce. “The new Vector HE 19 is lighter, quieter, offers improved pull-down capacity and has the most efficient cooling system of any trailer we’ve had in the fleet. This brings real benefits for our business, and we fully expect it will become the standard unit for us moving forward.”

The new Vector HE 19 system utilises Carrier Transicold’s all-electric E-Drive technology, which combined with a new multi-speed engine design, delivers up to 30 per cent in fuel savings when compared to the existing Vector 1950 unit. These figures have been independently verified against the European Committee for Standardisation (CEN) and the Association Technic Energy Environment (ATEE) partial load fuel burn standards. At the same time, the oil drain interval for the unit’s engine is doubled when compared to its predecessor.

The Vector HE 19 units use of a fully hermetic scroll compressor and economiser helps to deliver a 40 per cent increase in refrigeration capacity during pull-down, while reducing the chance of refrigerant escape by 50 per cent. The system is also 19 per cent more efficient when plugged into the electrical grid on standby, meaning Lunar Freezing will see reduced diesel, maintenance and electricity bills.

“We have enjoyed a strong relationship with Lunar Freezing since 2001, supplying both trailers and a rigid truck body for their busy fleet,” said Gray & Adams Sales Manager, Stewart Massie. “Most recently, they have worked with us on a project to trial and test a new rear buffer arrangement, which has proven so successful that it has been incorporated into this new trailer. Being based so close to our factory, they are a great fleet to work with on research and development projects.”

Lunar Freezing operates a fleet of 10 Carrier-cooled trailers, each averaging around 100,000 kilometres a year and on the road up to seven days per week. Founded in 1990, the company offers fishing, processing, cold storage, and transportation of fish products across the UK and into Belgium, France, Holland and Germany.