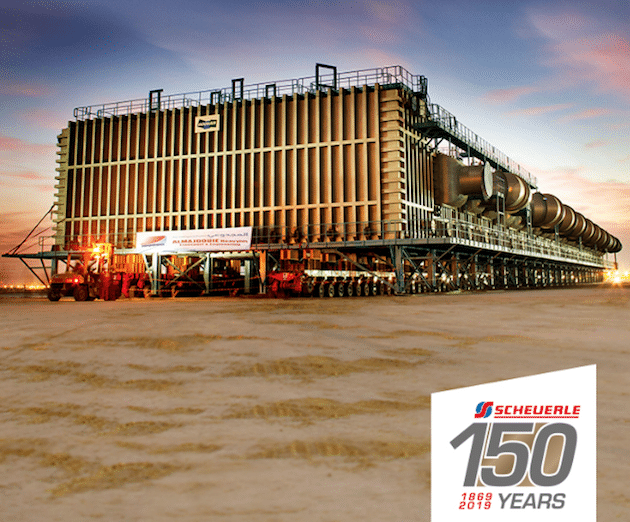 Scheuerle Fahrzeugfabrik has been part of the Transporter Industry International Group (TII Group) since 1988 and has produced innovations including hydraulically supported pendulum axles and the Self Propelled Modular Transport (SPMT).

TII Group said Scheuerle’s origins date back to 1869 when master blacksmith, Christian Friedrich Scheuerle, acquired a blacksmith's forge in the town of Pfedelbach, which laid the foundation for a vehicle factory. Grandson, Willy Scheuerle, made history in 1937 when he founded Scheuerle Fahrzeugfabrik and produced heavy duty vehicles. A year later he built a new production hall on the outskirts of Pfedelbach where the OEM’s headquarters are still located today.

“Willy Scheuerle paved the way in the modern heavy-duty transport sector with a range of innovative technologies,” TII Group said. “As early as 1937, the first low loaders with detachable bogie units and mechanical all-wheel steering were realised. In 1959, Willy Scheuerle and his team developed the construction principle of the hydraulically-supported pendulum axle which facilitated the mounting of several axles in a row in order to carry higher payloads. This technical solution remains the basis of modern day heavy-duty transport.”

After the Second World War, Willy Scheuerle had to rebuild his factory as it had been completely destroyed. From then on it was full steam ahead, according to TII Group. In 1949, Scheuerle's first low-bed trailers still featured a mechanical steering system and mechanical axle compensation. The payloads of these low-loaders with two or more axles were sufficient however to transport loads ranging from ten to one hundred tonnes. In 1956, Willy Scheuerle and his team developed the construction principle of a hydraulically-supported pendulum axle which facilitated the mounting of several axles in a row. The production of multi-axle heavy-duty vehicles began. A groundbreaking invention, TII Group claims, because even today the hydraulic pendulum axle is still the main principle of modern heavy transport operations worldwide. Shortly thereafter followed the introduction of the hydraulic axle compensation.

“Scheuerle presented the first vehicle with hydrostatic self propulsion which went by the name of ‘Willymog’,” said TII Group. “The Hohenlohe-based engineering expertise knew no boundaries. The development of hydraulic multi-directional steering for ship section lift transporters marked another milestone in the industry. This technology made it possible to turn the pendulum axles via the steering wheel in the driver's cab to a 90-degree position. Two years later, in 1972, followed the world's first electronic multi-directional steering for self-propelled heavy-duty transporters. Another unique innovation that allows the pendulum axles to turn to any required position.”

Scheuerle Fahrzeugfabrik has made a name for itself through its outstanding engineering capabilities and excellent vehicle quality. In particular, the invention of the SPMT – a modular self-propelled transport platform that can be used in numerous ways and which can be used to transport loads to locations around the world due to its flexible container dimensions.

“With a total of around 10,000 axle lines, Scheuerle is the world market leader in this segment,” said TII Group. “In addition, the SPMT and other heavy-duty combinations have enabled the company's customers worldwide to set many world records along with numerous entries in the Guinness Book of World Records.”

Electronic multi-directional steering cleared the way for a bestseller, according to TII Group. “SPMT has been synonymous with this transport technology that is used to move the world's heaviest loads weighing several thousand tonnes. Thanks to its container dimensions, the SPMT can be transported to locations worldwide and used very flexibly. Up to now, it is the best selling vehicle from Scheuerle Fahrzeugfabrik. With more than 20,000 axle lines on the market today, the SPMT provides the largest international fleet thereby making the company the world market leader for heavy-duty vehicles with hydraulically-supported pendulum axles in this segment.”

Scheuerle's customers have secured a range of world records and entries in the Guinness Book of Records with their unique products.

“In 1987, for example, the Goliath modular transporter combination transported a petrochemical plant facility weighing more than 2,000 tonnes,” said TII Group. “Scheuerle Fahrzeugfabrik's first entry in the Guinness Book of Records was through a road transport of 1,800 tonnes in the same year. The engineers did not rest on their laurels but hurried ahead with giant strides. As early as 1989, they were responsible for setting the world record through an off-road transport assignment carrying 6,500 tonnes and moving 5,000 tonnes in 1990 for the heaviest road transport. Events continued at a very fast pace. In 1991, they constructed what was at the time the world's largest side girder deck with a span of 43 metres and a monoblock ship section lift transporter – the world's heaviest payload on a single vehicle: 700 tonnes. In 1994, the record for the heaviest off-road transport was now 11,000 tonnes. In 2004, the best-selling SPMT set the record for an off-road transport with the transportation of an oil and gas platform weighing 14,350 tonnes on 500 axle lines. The salvage of the Sewol Ferry in 2017 marked the last world record to be set. In the process, the modular vehicles of the SPMT and K24 series moved a gigantic 17,280 tonnes.”

Two of the world’s largeest antenna transporters, named ‘Otto’ and ‘Lore’ after the owners of Scheuerle, are also reported to be recognised for their outstanding technical characteristics. Since 2007, the international research project ALMA (Atacama Large Millimeter Array) has been using these to transport gigantic radio telescopes up to heights of 5,000 meters above sea level in Chile. In 2012, the SPMT's secured Scheuerle another entry in the Guinness Book of Records by transporting a huge technical plant facility in the Middle East.

At Bauma 2019, EU Commissioner and former Prime Minister of Baden-Württemberg, Günther Öttinger, congratulated the managing partner of the TII Group, Susanne Rettenmaier, and the CEO of Scheuerle, Gerald Karch, on the long-standing existence of Scheuerle.

“This represents the rapid on-going internationalisation of the company and a wealth of experience acquired through the leadership of comparable innovative companies,” said TII Group. “The overhaul of the existing product range and new innovative products will open up new international customer groups for the vehicle manufacturer. With this, Scheuerle has set the course for the future – as master blacksmith Christian Scheuerle did when he bought a blacksmith's forge 150 years ago in a small village in the Hohenlohe area.”