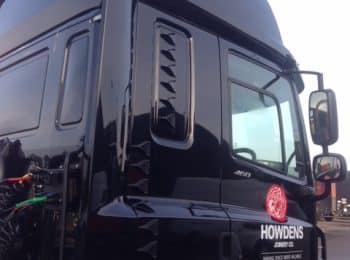 Airtab, according to Celerity DRS, is a product designed to reduce fuel consumption by altering, controlling and smoothing air flow around a vehicle. The airtabs target and reduce drag at two locations: the gap between the prime mover and the trailer and at the rear of the trailer.

“It’s a product which I believe will contribute significantly to the transport market, offering increased safety, stability and fuel savings. Not to mention the environmental benefits from the reduction of fuel emissions, which is becoming more and more important,” he said.

• Drivers report handling improvements in the stability of the trailer.

• Increased driver safety from both increased stability and also improved visibility to the rear of a vehicle in wet conditions.

• Less dirt and grime is stirred up at the back of a vehicle- tail lights and the rear of the vehicle remain cleaner for longer.

“In the UK especially, but also in mainland Europe, several transport companies who have been running with Airtab have been keen to share their amazement in the short-term return on investment offered by the product,” said Ezendam.

“Within weeks the investment has been paid back in full. We are really excited to take on the distribution of this product,” he said.

Celerity DRS will be exhibiting the Airtab at Transport Logistic in Munich, Germany, from June 4-7 (hall 6, stand 221).