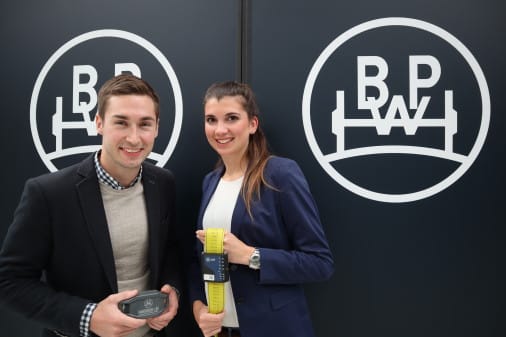 The innovation teams work with vehicle manufacturers, hauliers and shippers to develop new transport applications, and have used agile methods to bring new ideas to market in record time.

The iGurt is reported to be worth its weight in gold for hauliers who have to claim transport damages of around 1.2 billion euros annually from their insurance companies.

“Inadequately secured cargo can not only fall over, it can even cause the entire drawbar trailer to lurch from side to side and tip over, causing devastating accidents,” said BPW. “Up until now, truck drivers have only secured their cargo on the basis of their instincts and visual judgement. If the strap is too tight, however, it can damage the cargo. If it’s too loose, it can start to slip and come completely detached from the lock.”

Product Manager, Katharina Kermelk, at BPW’s Innovation Center for Mechatronics in Wiehl, Germany, is now giving the lashing strap a voice: an easy-to-use, robust sensor fastened to the strap displays the preload directly on the housing by means of an LED and transmits it to an app on the driver’s mobile phone while driving.

“The iGurt could considerably simplify load securing checks by the police, for example,” said Kermelk. “It is conceivable that trucks equipped with the iGurt could be inspected and waved through remotely. And digital cargo securing is also necessary for autonomous transport – when trucks drive themselves, the cargo must also be able to monitor itself, report on its own and most importantly, stop the vehicle in the event of an emergency. This is also why the iGurt has attracted a great deal of interest from research institutions and innovation laboratories in the vehicle and insurance sectors that are working on the autonomous transport system of the future.”

Meanwhile, Head of BPW Innovation Laboratory in Siegburg, Alexander Lutze, is adamant that autonomous cargo must come before autonomous driving. He works with senders to develop an ’Internet of Transport’ where goods goods remain in constant contact with ERP and merchandise management systems like SAP while on their way from A to B.

This system, according to BPW, is what gives senders the ability to track the flow of goods across different locations. This is made possible by a small, robust sensor attached to the cargo carrier or the cargo itself. It uses an innovative ultra narrowband network to transmit location, temperature and vibration data. Since the CargoTracer works without expensive and power-hungry mobile radio technology, it makes cargo tracking affordable for the first time. The battery lasts up to five years. For the jury of the German Innovation Award, this solution deserved two awards: the CargoTracer was named the winner in the ‘Excellence in Business to Business – Logistics & Infrastructure’ and ‘Design Thinking’ categories.

The German Innovation Award is presented by the German Design Council to groundbreaking innovations that have a lasting effect and offer users real added value.

“The submitted innovations are evaluated with a focus on user-centricity,” said German Design Council Managing Director, Andrej Kupetz. “It is the distinguishing feature of the German Innovation Award. This is especially successful if future users are involved in product and design development at an early stage.”

The German Innovation Award’s evaluation criteria include aspects such as the level of innovation, user benefit, and cost-effectiveness. The winners were chosen by a jury of distinguished experts – including physicists, patent consultants, computer scientists, financing specialists, product designers, technology historians and marketers.

“This is how we guarantee an individual, neutral and professional assessment,” said Kupetz.

The German Innovation Award was initiated and implemented by the German Design Council, which was established by German parliament in 1953 and funded by the Federation of German Industries (BDI). The foundation’s mission is to enhance the competitiveness of German companies, which it has been pursuing for 66 years.

(Image L-R: Head of the BPW Innovation Lab, Alexander Lutze, with the CargoTracer and Product Manager for the iGurt, Katharina Kermelk.)