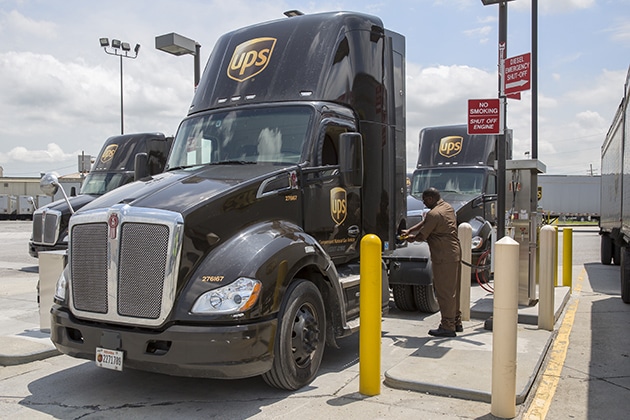 The announcement comes amidst heightened interest in electric vehicles among industry in North America.

Natural gas, is, according to the company, very much a long term priority after it committed to a purchase of seven-year 643.5 million litres from Clean Energy Fuels.

The deal, as reported, will extend through 2026 with UPS announcing that it expects to reduce its greenhouse gas emissions by more than a million tonnes.

It remains the largest commitment for use of renewable natural gas to date by any company in the US.

According to the company, UPS consumed nearly 106 million litres in its ground fleet since 2014.

It now intends to use nearly that much each year.

According to Mike Casteel, UPS Fleet Procurement Director, the world has major issues with trash and emissions.

“Renewable natural gas, produced naturally from bio-sources such as landfills and dairy farms, not only turns trash to gas, but it turns it into clean gas,” he said.

“Since RNG is supported by existing national infrastructure used to transport natural gas, it’s a winning solution that will help UPS to reach our ambitious sustainability goals,” said Casteel.

“At the same time, we hope our unprecedented seven-year commitment serves as a catalyst for wider adoption of RNG by other companies.”

California Air Resources Board Low Carbon Fuel Standard program has shown in recent data that biodiesel and renewable diesel fuel use reduced 4.3 million tonnes of carbon dioxide in California last year, more than any other fuel type of fuel, including ethanol and battery electric power.

In other news, a new package freight and supply chain facility in Prague is coming soon as businesses in the Czech Republic increasingly take advantage of export opportunities, according to UPS.