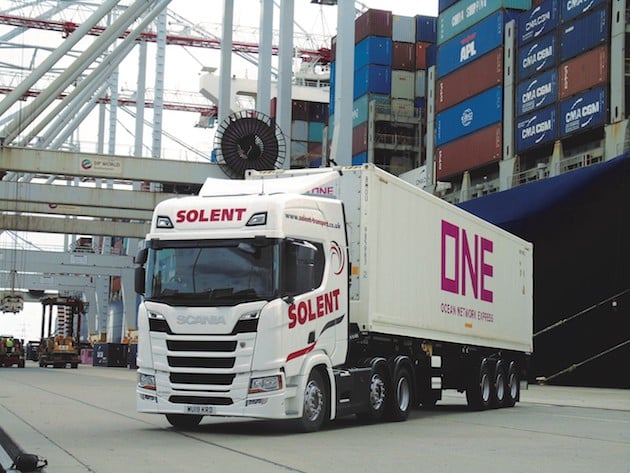 Based in Southampton, a short distance from the Docks, Solent has so far this year added 10 Box Liners to its container carrier fleet, the latest two of which the company fitted with the on-board auxiliary power.

The Krone Box Liners are designed to carry 20’, 30’, 40’ and 45’ containers, two boxes at once or any standard sized tank. Quick-release twist locks also ensure fast and easy handling. For Solent Transport Services Managing Director, Mike Lewry, this is a key operational benefit.

“We specialise in container transport throughout the UK to all major ports, so it’s important to use only the most flexible equipment which will enable us to achieve maximum utilisation and a fast return on investment,” said Lewry. “These Box Liners are perfect in all respects and easier to operate than other skeletal trailers. No question, that adds up to faster turn-round times and greater efficiency all-round.”

According to the manufacturers Genmark, the genset runs at just 70 dBa and can handle a 3 x 1-phase circuit with varying loads, as well as three-phase loads at the same time. A 460v/60Hz option is also available.

“Our steady growth, since early 2013, has been underpinned by the maxim: ‘If it goes in a container, we carry it.’” said Lewry. “That said, each customer’s requirements are individually catered for and since we added the gensets, we have even more flexibility to offer.”

Appearance is everything according to Lewry. “It’s good to know that these Box Liners will go the distance – both from an image and low-maintenance standpoint,” he said. “Overall, this is a higher quality container carrier and like-for-like, a far superior product.”