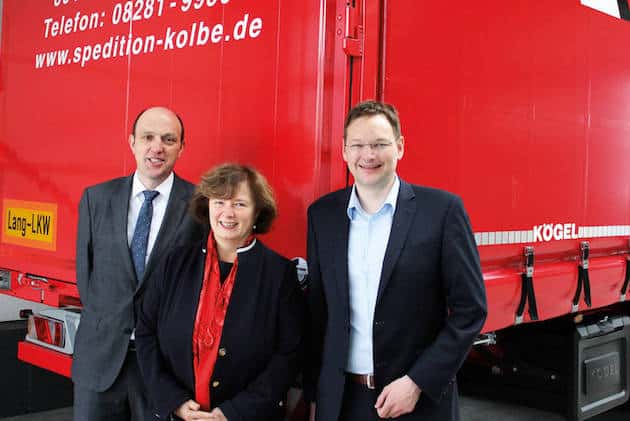 The Bavarian Minister for Construction and Transport, Dr Hans Reichhart, visited the main Kögel plant in Burtenbach this week.

Kögel Managing Directors, Petra Adrianowytsch and Thomas Eschey spoke to the state minister about the significance of the regional economy in regional politics and the upcoming 9th amendment to start using long trucks in regular operation on certain routes, along with the resulting possibility of using the elongated semi-trailer, which has been extended by 1.3 metres in 15 German states.

“During his visit to the plant, Reichhart revealed himself to be a ‘connoisseur’ of the Bavarian trailer manufacturer, which is no surprise considering that he grew up in the neighbouring village of Jettingen-Scheppach and still lives there with his family today,” Kögel said in a statement.

State Minister Reichhart emphasised the importance of Kögel trailers for the construction and transport industry: “Kögel makes an important contribution to Bavarian goods transport. The elongated trailers produced here support combined transport by rail and road, by enabling the smooth transfer of loads between the different modes of transport. And precisely that is our goal: By expanding combined transport, we want to shift even more transports onto railways and waterways to reduce the amount of traffic on the roads.”

More than ten years ago, according to Kögel, the state of Bavaria was the first German state to promote this system and fund a pilot project. Since then, the elongated semi-trailer has become a proven concept that combines economy and environmental friendliness by saving CO2.