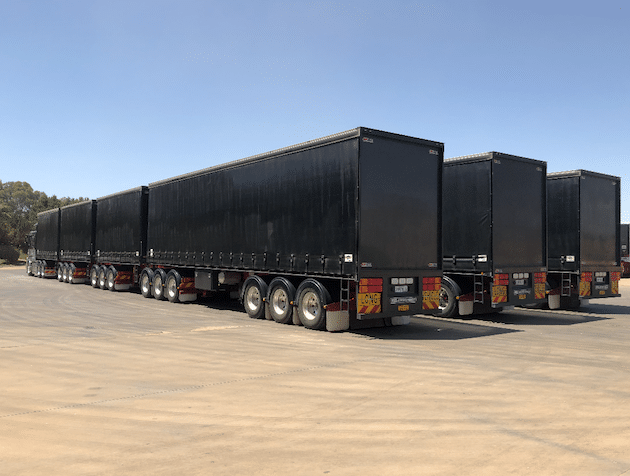 “We obviously went into this expecting a good outcome in terms of enhanced operational efficiencies compared to the B-triples we’d been using, but the B-quad has well and truly exceeded our expectations, making all the hard work to get it over the line well worth it,” said Angello Lamattina, Director of Rocky Lamattina & Sons.

“I’d like to acknowledge the efforts of everyone involved with making this happen, including the National Heavy Vehicle Regulator (NHVR), for their vision and foresight in enabling us to get this highly efficient combination up and running.”

In describing the situation, Lamattina suggested that while the benefits of a B-triple over a B-double are reasonable, moving to the B-quad has enabled the company to reach a critical mass in that it now has the means to haul virtually the equivalent of two B-double loads with vastly reduced running costs compared to operating two individual B-doubles.

“With our haulage work from Victoria to Queensland we couldn’t get enough weight on the B-doubles so we got permits to run B-triples which gave us an extra 15 to 20 tonnes of payload,” said Lamattina.

“However, the extra weight meant we had to use a different route which adds 150 kilometres to the leg and somewhat negates the benefit of running a B-triple compared with a B-double.

“The B-quad allows us an extra 30 to 35 tonnes of payload over a standard B-double which more than justifies the extra 150km added to the loaded leg due to the different route.”

Lamattina clarified that because the B-quad travels one way fully loaded with bins of carrots at a gross combination mass (GCM) of close to 104.5 tonnes and returns with just the weight of the empty bins, the company has been able to secure different permits for each leg, enabling a shorter journey on the unladen leg.

At this point he mentioned that the only change needed with the prime movers to make them suitable to pull the B-quad was the diff ratio.

The B-quad has an overall length of 36.5 metres, the same as a road-train, but Lamattina points out that there is actually more useable load space due to the close coupled nature of the trailers compared to road train combinations connected with dollies. Using Kenworth K200 cab-over prime movers also helps in this regard as opposed to the typical conventional (bonneted) road-train prime mover which adds an extra couple of metres at the front.

A further benefit of the close coupled B-quad over a conventional road train is the superior aerodynamics which undoubtedly enhances fuel economy. In this regard Lamattina said the results have met his expectations.

“We are allowed to travel at 100km/h in Victoria and Queensland and 90km/h in New South Wales, but we’ve found it’s best to keep it under 95km/h regardless, otherwise the fuel burn rate increases significantly,” he said.

“Pulling the B-quad on a return trip loaded one way we’re averaging 1.5km/l (4.24mpg) which I think is quite a respectable result.”

Another bonus of the B-quad, according to Lamattina, is better than expected tyre life. He said this is due to the average axle weights being lower than that of a B-double, adding that this also contributes to excellent braking characteristics and overall good road manners and stability of the combination. Furthermore, it imposes less point loading on infrastructure like roads and bridges which can only be a good thing.

With the B-quad concept having proven a huge success, Lamattina is in the process of securing more trailers through Southern Cross Trailers in Adelaide to make up additional combinations. He said the goal is to have four sets running between Victoria and Queensland with a further two operating in Victoria.

“All the benefits this combination provides including less fuel used, less tyre wear and road damage, and less trucks on the road all add to an outcome that is a win-win for us, the environment and the wider community,” he said.