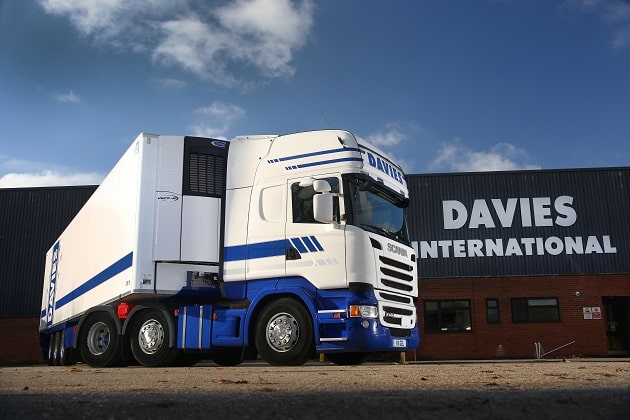 The new 13.6-metre trailers are like-for-like replacements and will be used intensively seven days per week, covering up to 150,000 kilometres each year. They are mounted with the first Vector 1950 units operated by the firm, which has enjoyed exceptional reliability from its previous generation Vector 1850 units over the last decade.

Regular payloads will include temperature-sensitive pharmaceuticals, ships’ stores and food products moving between the UK and mainland Europe. The company is a recognised specialist in cruise logistics, supporting ships calling at both domestic and international ports, where reliable and timely delivery is imperative.

“We pride ourselves on carrying the most temperature-sensitive payloads to customers across Europe, so we need a fridge that’s up to that task,” said Davies International Managing Director, Steven Davies. “The fact we kept our previous Vector units in service for 10 years is testament to their build quality, and we have no doubt the new units will deliver the same impressive performance.”

These benefits are supported by the new Vector 1950 systems, which offer increased cooling capacity versus the units they replace, for even faster pull-down speeds and the ability to haul larger loads over longer distances. They also continue to benefit from Carrier’s patented E-DriveTM all-electric technology, which transforms engine power into electricity through a generator, reducing risks of leaks and emissions. This technology significantly reduces fuel consumption and results in a lower carbon footprint and quieter operation.

“Choosing the everCOLD package gives us the ultimate peace of mind, particularly when moving temperature-sensitive cargoes a long way from home,” said Davies.

“On the rare occasions we have needed to use the service in the past, Carrier has always reacted straight away, assigning one of its pan-European service partners to get us back on the road quickly,” he said.

Davies International is headquartered in Fareham, Hampshire, and was established in 1971. The second-generation, family-run business diversified into refrigerated transport 30 years ago and now runs temperature-controlled services to more than 15 European countries.