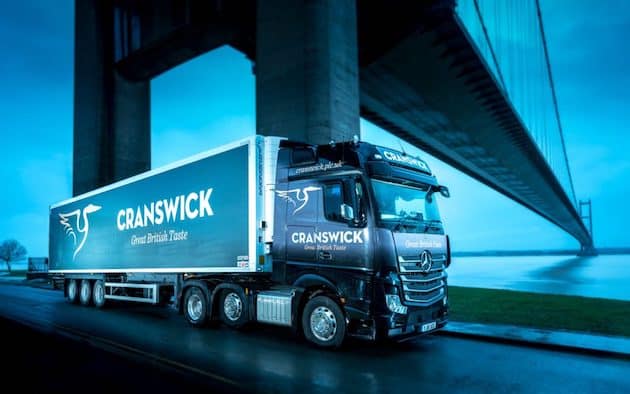 Cranswick was established in the early 1970s by a group of pig farmers based in the East Riding of Yorkshire. Through a combination of acquisitions and organic growth it has long been established as a major force in the food industry, according to Gray & Adams. Cranswick is reportedly one of the country’s biggest pig producers and a leader in best practice in the poultry industry.

Cranswick’s latest multi-temperature Gray & Adams trailers have aerodynamically efficient panel cappings, and vortex generators which manage the airflow over the rear. Each trailer is also fitted with a Vari-Stow moving bulkhead, a feature which has proved its worth in terms of load flexibility since it was first specified by the operator some three years ago as well as Carrier Vector 1950 MT refrigeration units.

Cranswick has been a Gray & Adams customer for more than two decades. Today, products built by the UK’s leading manufacturer of temperature-controlled road transport equipment account for the majority of the 50 semi-trailers which operate from Cranswick’s headquarters, and a second abattoir and butchery in Watton, Norfolk. Most are box versions for carrying palletised product, although the line-up includes a handful of meat-railers.

Although it has employed leasing as an acquisition method in the past, Cranswick has purchased its latest batch of trailers, and will run them for 10 years.

“In our experience, Gray & Adams is the only manufacturer whose trailers are built to last anything like that long,” said Cranswick Transport Manager, Dale Middleton.

“They offer a robustness and durability that others simply can’t match, and have proved capable of withstanding the physical abuse which is an inevitable consequence of repeated loading and unloading,” he said.

Every one of Cranswick’s multi-temperature trailers is built by Gray & Adams – those by its other supplier are all single-temperature boxes. This is explained not only by the operator’s desire to achieve maximum uptime and life from equipment that represents a more substantial investment, but also by the relative ease of operation of Gray & Adams’ movable bulkhead.

The bulkhead is roof-mounted and offers excellent insulation properties, so that temperature integrity between chilled and frozen compartments is maintained. Its lightweight GRP finish means it is easily cleaned, an important attribute when transporting food. The Vari-Stow system also incorporates a unique mechanism that allows the gas rams to be changed using a simple tool while the bulkhead is in situ – the fact that complete removal is not required, as would normally be the case, saves time and improves health and safety. The bulkhead can also be stowed or removed altogether for single-temperature operation.

“Our drivers and loading staff report that it’s much easier to lift and control than the version offered by our other trailer supplier, which helps to explain why we don’t specify theirs.

“We’ll run several mixed loads every week and value highly the flexibility which the movable bulkhead offers. It’s become an essential asset in enabling us to maximise the efficiency of our distribution operation.

“With its consultative sales ethos and bespoke design approach, Gray & Adams is a first-class company to deal with. We enjoy an excellent working relationship with its Sales Director Andrew Brown, who always keeps us abreast of the manufacturer’s latest innovations and developments,” he said.