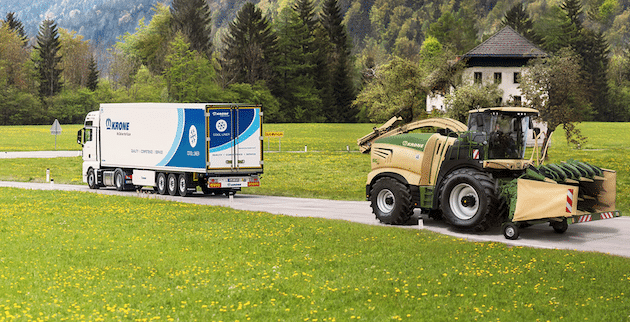 The Krone Group has reported a record turnover of about €2.1 billion for the period 1 August 2017 – 31 July 2018 despite difficulties in the agricultural machinery and commercial trailer industries.

According to the German trailer builder, this result marks a significant increase over the previous result year-to-year of €1.9 billion.

Germany as the home market reportedly accounted for €582.9 million, a rise of €67.4 million (13.1 per cent). About 67.4 per cent of the domestic sales were accounted for by the commercial vehicles division and 32.6 per cent by the agricultural machinery business.

Sales in markets outside Germany amounted to €1.5 billion, nearly €171 million (12.4 per cent) up over the previous year. Nearly 71 per cent of these export sales were generated by the commercial vehicles business and 29.1 per cent by the agricultural machinery division. As such, the international business accounts for 72.7 per cent in total sales which is roughly equivalent to the level of the previous year (72.8 per vent).

The Krone Group employed 4,897 staff in the past financial year (4,497 permanent staff in the previous year). This figure includes 278 apprentices (previously 243). The increase in permanent staff members is accounted for by an increase in business activities and the expansion of our sales networks in both divisions. Commercial Vehicles S.A. employed 2,694 staff in the past financial year and Krone Agriculture 2,063 members of staff whereas 140 members were on the payroll of the Holding company, working at various offices and locations of the Group.

In the financial year 2017/2018, the balance total increased to €1,130.2 million from €1,031.3 million. Total investments of €67.0 million (previously €76.0 million) and changes in the consolidated group of €1.1 million are offset by depreciation of €28.0 million in both business segments. The growth mainly results from a number of investments in various production sites.

Liquidity increased by €26.5 million to €147.3 million. This was mainly accounted for by the decrease in receivables from goods delivered and services provided and the increased annual surplus. On account of the annual surplus, equity capital increased from €486.1 million to €533.8 million on the balance sheet date. The equity ratio increased slightly from 47.1 per cent to 47.2 per cent despite the again higher balance sheet total.

In the 2017/2018 fiscal year, the medium and long-term debt capital increased to €325.6 million from €290.4 million. The Group currently has €859.7 million (previously €776.5 million) available in the form of medium and long-term capital. This covers both fixed assets and the entire stock assets as well as many of the receivables.

The highest single investment of about €40 million was the new coating centre at the Werlte production site. Further investments in the reported period were made in the new and automated component manufacturing line at the Herzlake site. The Spelle site implemented various measures to expand its manufacturing and assembly capacities. In addition to investing in modern clamping and quick-swapping systems that reduce set-up times the division advanced the development of a universal tool management system.

Bernard Krone, Managing Partner of the Krone Group, is delighted with the company performance in the 2017/2018 financial year.

“The repeated increase in sales bears testimony of our successful strategy of positioning ourselves as a provider of excellence of comprehensive services for commercial trailers and agricultural machines,” said Bernard Krone.

“Furthermore, as a medium-sized and family-run enterprise we benefit from being quick, flexible and innovative. An equity ratio of 47 per cent gives us a solid financial foundation that gives us the entrepreneurial leeway to implement further innovations and hence continue the path of sustained growth.

“Furthermore, the diversification in commercial trailers and farm machinery offers us exceptional opportunities as we develop practical solutions for both types of products, helping our customers around the globe to meet their challenges.

“A rapidly growing world population calls for an increased and more efficient food production and this inevitably involves an increase in freight transportation. Digitisation plays a key role in this context. Already today, Krone provides a wide range of future-oriented solutions for smart farm machines and smart trailers already today.”