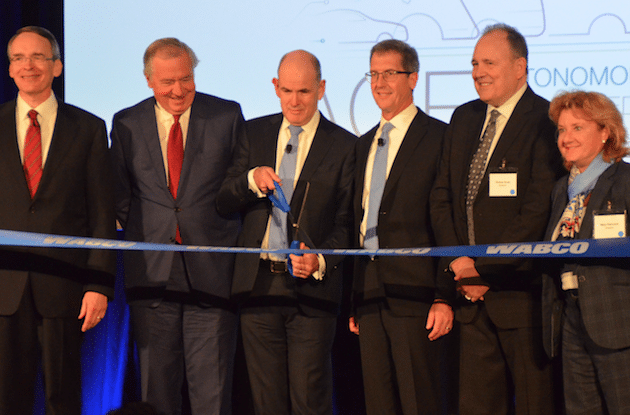 Wabco Chairman and CEO, Jacques Esculier, and WABCO President – Americas, Jon Morrison, hosted the ceremony, and were joined by elected officials and business leaders from the area.

The 102,000 square-foot (9,476 square-metre) building, located approximately 30 miles (48km) north of Detroit, brings Wabco’s engineering, quality, sales, marketing and corporate functions together in one location. Approximately 200 employees, including those who relocated from Wabco’s previous locations in nearby Rochester Hills and Troy, Michigan, work in the building. The company plans to add an additional 90 jobs at the site over the next three years.

“We’re excited to be in this beautiful new facility, which reflects WABCO’s leadership in technologies that advance the safety, efficiency and connectivity of commercial vehicles in this region,” said Morrison.

“The new headquarters creates an environment that is intentionally open and transparent to foster collaboration, inspire innovation and strengthen global connectivity. Not only is this a great place for our employees to come and work every day, but it also acts as a catalyst for developing and advancing innovation to better serve our customers,” he said.

In his comments at the ceremony, Morrison thanked the Michigan Economic Development Corporation (MEDC), the City of Auburn Hills and others for helping sustain and grow well-paying jobs in Michigan.

The State of Michigan and the City of Auburn Hills presented Wabco with plaques for its new facility.

Wabco has significantly expanded since forming the Americas Regional organisation. Over the past two years, Wabco has tripled its workforce as it acquired four high-tech manufacturing businesses: MICO, Laydon Composites, RH Sheppard, and the buyout of Meritor Wabco Vehicle Control Systems, the former 50-50 joint venture with Meritor. In addition to acquisitions, Wabco’s recent growth in North America includes the March 2017 opening of a new manufacturing facility in Charleston, SC.