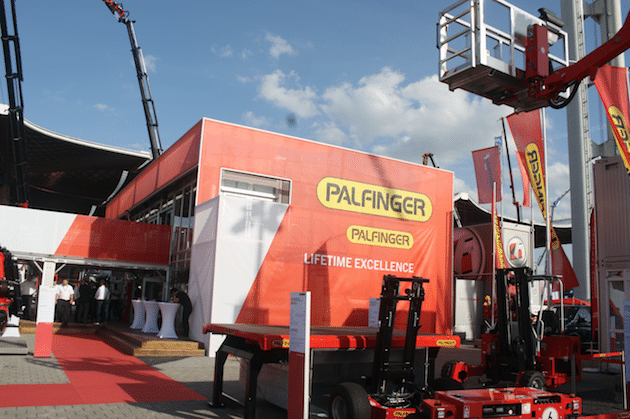 Austrian load handling specialist, Palfinger, has continued to record strong organic growth in the first three quarters of 2018, primarily as a result of good performance in Europe, North America and Russia.

The business’ restructuring measures in North America and in the marine segment has reportedly continued to have a detrimental effect on earnings however in North America all relevant one-time effects were already recorded in the first half of 2018.

“The level of incoming orders was again higher than in the previous year and clearly surpassed our expectations,” said Palfinger CEO, Andreas Klauser. “We are also satisfied with the earnings generated to date: Despite the ongoing restructuring, operating profitability has almost reached the 10 per cent threshold. At present, we are not seeing any slowdown in demand.”

In the reporting period, restructuring costs amounted to €14.7 million (Q1–Q3 2017: €13.5 million). The operating result (EBIT) thus increased by 10.7 per cent year on year from €91.9 million to €101.7 million. The consolidated net result for the first three quarters of 2018 came to €49.5 million, which is 1.9 per cent lower than the previous year’s figure of €50.5 million, primarily as a result of a higher tax rate and the increase in earnings attributable to non-controlling shareholders. Earnings per share amounted to €1.32, as compared to €1.34 in the first three quarters of 2017.

To optimise its financing structure, Palfinger raised several promissory note loans, featuring maturities between five and ten years and a volume of €80 million and USD $25 million at the end of October.

In recent months, the Austrian Financial Reporting Enforcement Panel (AFREP) carried out a review of Palfinger. On 25 October 2018, Palfinger was notified of a material need for impairment of the goodwill of the business area Marine cash-generating unit (CGU) as at 31 December 2017. The Management Board estimates that the extent of the potential restatement may amount to approximately half of the goodwill recorded (€156.5 million as at 31 December 2017). Therefore, the impairment will substantially reduce the Group’s equity and equity ratio and will additionally lead to a retrospective reduction of the 2017 results. Palfinger reportedly expects to receive the final review report in the next couple of weeks and will perform and publish all necessary corrections on the basis of said report.

In the first three quarters of 2018, revenue in the land segment increased by 11.9 per cent year on year from €908.8 million to €1,017.3 million. The segment’s normalised EBITDA (EBITDAn) rose from €153.8 million to €168.6 million, an increase of 9.6 per cent. The restructuring costs allocated to this segment amounted to €6.0 million in the reporting period, as compared to EUR 8.9 million in the first three quarters of 2017.

In the EMEA business area, Palfinger once again recorded higher incoming orders than in the previous year. The bottlenecks which had existed in this connection since the end of 2017 were alleviated in the third quarter. In North America, following a two-year restructuring phase, all larger one-time effects were recorded by the end of the first half of 2018.

In the first three quarters of 2018, the sea segment generated revenue of €165.3 million, corresponding to a decline of 10.3 per cent from the previous year’s figure of €184.3 million. This development reflects the extremely difficult business environment. The segment’s normalised EBITDA (EBITDAn) decreased year on year from €5.8 million to €4.0 million. The restructuring costs incurred by this segment were €8.5 million, as compared to €4.1 million in the same period of the previous year. As market performance was distinctly weaker than originally expected, the restructuring of this segment has been continued intensively.

In September 2018, Palfinger began implementing a new global organisational structure. By the beginning of 2019, the new Global Palfinger Organisation (GPO) will have been fully implemented and help reduce the complexity of the Group, which has grown in size considerably, and utilise additional internal synergies. The existing group-wide initiatives will be consolidated and additional ones developed. The objective of this more streamlined organisational structure is to support the Group’s profitable growth.

In the first three quarters of 2018, the Palfinger Group again recorded an increase in incoming orders, which indicates that for the remaining 2018 financial year business performance will continue to be satisfactory overall. Moreover, the remaining backlog is expected to be, for the most part, resolved by the end of 2018.

The adjustment of the 2017 financial statements on the basis of the AFREP review will not have any effect on the 2018 results, but will reduce the Group’s equity and equity ratio accordingly.

The management continues to foresee an increase in revenue and operating profitability for 2018. As a result of the further restructuring measures, the higher tax rate and the increase in earnings attributable to non-controlling shareholders the consolidated net result for 2018 is not expected to reach the record levels of 2015 and 2016.