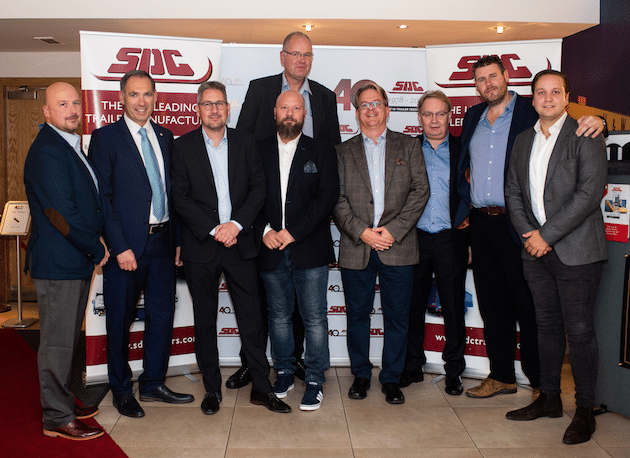 Northern Irish OEM, SDC Trailers, has celebrated 40 years in operation, and is now a member of the world’s largest manufacturing group, CIMC.

Established in a small tin shed in Bellaghy by welder and fabricator Seamus McCloy, SDC has grown significantly over the last four decades to become the UK and Ireland’s leading manufacturer of bespoke semi-trailers. A local manufacturing success story, the company now employs almost 1,000 staff across four UK based manufacturing plants.

On 12 October, SDC marked the occasion by inviting customers, staff, suppliers and distributors to a tour of its factory in Toomebridge followed by a celebratory dinner held in the Europa hotel, Belfast. Over 350 people attended the event with highlights including entertainment by the Red Hot Chilli Pipers and a Q&A session with former champion jockey Tony McCoy. SDC’s CEO, Enda Cushnahan, shared his experiences from the last 21 years with the company and was joined on stage by Seamus McCloy to discuss the company’s success as the UK and Ireland’s largest semi-trailer manufacturer.

“I have been with the company for half of those 40 years and it is privilege to now serve as its Chief Executive Officer,” said Cushnahan.

“I see my role as building on the legacy of our founder Seamus McCloy and taking the company forward into another 40 years of success.

“It has been a great journey and I would like to thank all our staff, customers and suppliers who have made it possible. While our trailers have a deserved reputation for quality, reliability and toughness, it is the commitment and passion of these people that will ensure the company continues to thrive and grow,” he said.

According to SDC, it does not build standard products for stock – every trailer on the production line is built to order for a specific customer.

Around 40 per cent of SDC’s output leaves the factory with a body fitted, with a range featuring over 500 different variants from curtain-siders and box vans to skels, platform and urban trailers.

Earlier this year, SDC completed a €7.7 million expansion to its manufacturing headquarters in Toomebridge, improving production capability and output.

The company also recently opened two state of the art training facilities at its headquarters in Toomebridge – a piping and wiring training centre fully equipped with the latest semi-trailer technology and a welding centre which has eight individual welding bays with cutting, extraction, burning, clamping, measuring and demonstration equipment. With new trailer sales in excess of 8,000 units and turnover of over £200m last year, SDC Trailers are well placed to continue their success in both local and international markets.