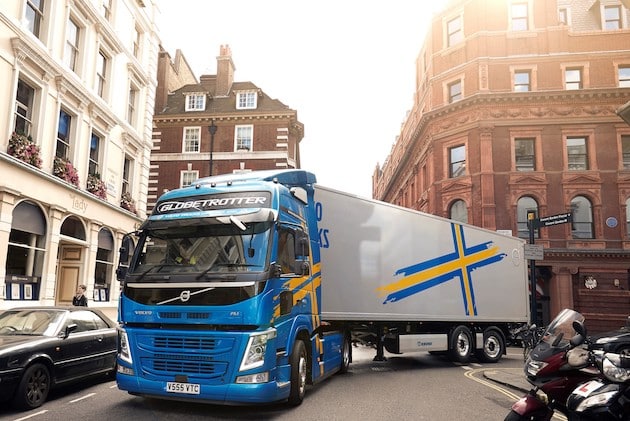 Commercial vehicle manufacturer, Volvo Trucks, is trialling a Krone City Liner in urban areas, including inner London, to spark the debate regarding the use of articulated vehicles, where currently the London Lorry Control Scheme (LLCS) restricts the movement of Heavy Goods Vehicles (HGVs) over 18 tonnes but does not apply to ‘rigid’ or eight-wheel vehicles.

Nicknamed ‘Lorry Ban’, the scheme controls where HGVs over 18 tonnes can drive at night and weekends and requires permission to be granted by London Councils – who manage the Traffic Order on behalf of 31 London boroughs, the City of London and on the Transport for London Road Network.

The Krone City Liner trailer is designed specifically for use in urban environments where ‘conventional’ semi-trailer manoeuvrability is limited, due to restricted space and overall vehicle length. Its compact box body rides on a 11.025m chassis with twin axles, both rated at 9000kg and has a wheel base (king pin to second axle) of 7.40m. Also, the front axle can be raised and lowered while the rear axle is force-steering – at up to 25 degrees.

“This combination of Krone City Liner and Volvo FM 420 4×2 Globetrotter LXL tractor unit is perfect for manoeuvring in tight corners,” said Volvo Head of Product Demonstration, Martin Tomlinson. “Also, it clearly demonstrates that an articulated vehicle of this specification is equally suitable as an eight-wheeler when it comes to operating in urban areas.”

The LLCS has been in place since 1985, under the Greater London (Restriction of Goods Vehicles) Traffic Order 1985, but now, says Volvo and many other players in the UK commercial transport industry, it is time to review the scheme.

“Quite simply, over the last 30 or so years, technology has moved on: vehicle and trailer designs are now more sophisticated than ever and by using this latest ‘City solution’ from Krone and Volvo, we feel it’s time to put the discussion regarding the restriction of articulated vehicles in urban areas back on the table,” said Tomlinson.