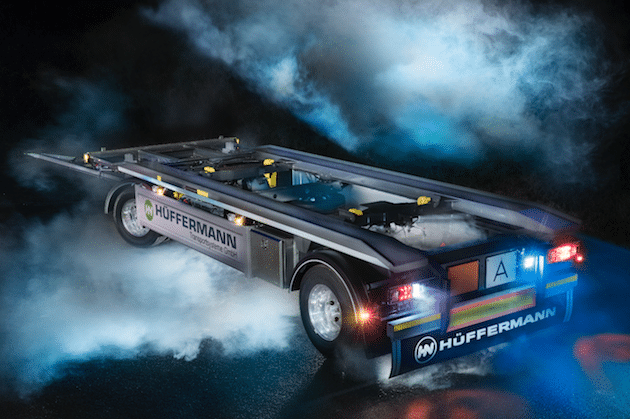 Lighting specialist, Hella, unveiled a suite of innovations at the IAA Commercial Vehicles Show in Hanover, including Visiotech projection technologies and intelligent lighting for semi-trailers.

Hella has identified opportunities to use its electronics to improve safety for commercial vehicle operators when loading and unloading. Visiotech projection technology can be used to optically highlight ‘danger zones’.

Visiotech, according to Hella, can project warning signals and symbols on to the ground, and has already been integrated into three products for special vehicles: in the LED projection module and two warning lights SL60 LED and Modul 50 LED Spot. Hella said that both products are approved for applications outside the German road licensing ordinance (StVZO), but for special applications on the road, special permits are required.

The LED Projection Module was reportedly developed for original equipment, where projections make it possible to clearly mark, for instance, the required loading or safety areas for commercial vehicles or emergency vehicles. In addition to projecting exclamation marks as a warning, Hella can develop other projections in collaboration with vehicle manufacturers.

The SL60 LED warning light is available for OEMs and the independent aftermarket. A special lens optic allows the light rays to converge and become so sharply focused that, depending on the light’s orientation, a horizontal or vertical line appears on the ground.

In addition to better vehicle visibility, Hella showcased new reverse/worklights in a compact series that are designed to withstand tough conditions including exposure to water, salt and gravel throw.

The Modul 70 LED compact unit has four high-power LEDs and is capable of brightness of up to 800 limens, which provides extra-wide illumination.

The Power Beam 1000 LED compact, generates six high-power KEDs with an output of 1,000 lumens and an energy consumption of 12 watts. These worklights are reportedly ideal for changing from halogen to LED technology.

“When decoupling trailers from towing vehicles and placing them on parking lots or public roads, the power supply for the lighting system has generally been cut off,” Hella said in a statement.

“Only reflectors are then left to mark the vehicle. The missing lighting can present a danger to other road users, especially at night. Lighting and electronics expert Hella has therefore developed an independent battery-supported power source together with commercial vehicle trailer manufacturer Hüffermann Transportsysteme.

“The Park Safety Fix product, short PS-Fix, enables the active illumination of trailers even without a towing vehicle.”

PS-Fix can also be integrated via plug-and-play into existing Hella EasyConn wire structures of the lighting system.

The core of the PS-Fix is an electronics box that can operate the lighting system of a semi-trailer in a decoupled state. The control unit and battery packs are integrated in a 30x22x20cm box to be mounted onto the vehicle's side.

According to Hella, PS-Fix activates whenever the power supply is interrupted. Switches for the individual lighting functions are situated at the Hella PS-Fix system. Users can then make targeted use of lighting functions, such as parking and hazard warning lights. In addition, two aux connections allow for additional special functions, such as work lights or beacons. This enables safe vehicle loading and unloading at all times.