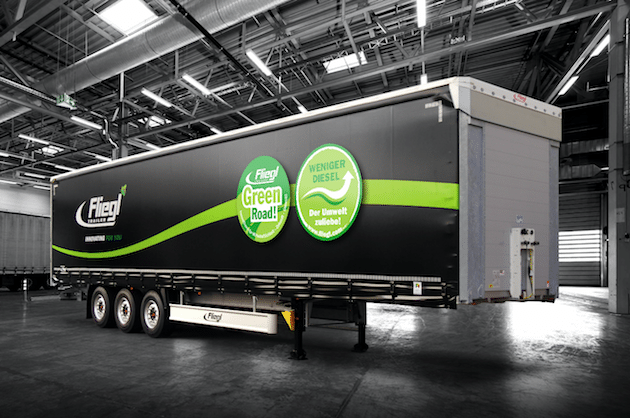 The RoadRunner is a three-axle vehicle featuring lightweight construction, an unladen weight of 6,000kg with a payload capacity of 29,000kg.

The coil trough, about 7,040mm long, is fitted with six coil brackets including angular support in front and attachable lash adapters.

With these covering elements at half width, gaps can be reportedly closed depending on the number and width of the coils being carried when standard covers are too big. This, according to the OEM, creates a surface in front and behind the coils which as far as possible extends up to the coils and is flush with them.

Fliegl said that options for securing cargo begin with the Load-Lock profile for flexible fastening of the lashing straps (2 x over 60 lashing points), which is integrated into the bevelled outer frame.

The RoadRunner on display at IAA in Hanover last month featured Quick Lock central tarpaulin lock, which reportedly doubles productivity for vehicle operators opening the tarp whereas closing it can take a third of the usual time.

Fliegl also presented its integrated lock (I-Lock), with door handles integrated into the frame; the Safe-Lock, a theft protection system that detects via sensor whether the door has been opened and can be configured to trigger visual and acoustic alarms; and a new roof structure for curtain-side bodies, which replaces plastics with spring wire.

The Blitz canopy top’s metal components are reportedly sturdier, do not become brittle due to material fatigue, and can be recycled.