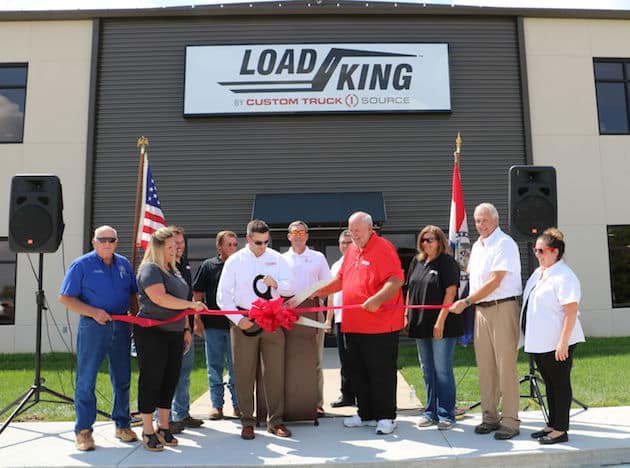 US-based OEM, Load King, has added a 60-tonne Lowboy trailer with a loaded deck height of 20 inches – reportedly the lowest in the industry – to its portfolio.

The LK503/605 SS SF Lowboy is rated at 60 tonnes, and the 20-inch loaded deck height is paired with the ability to add both a 24-inch and 36-inch flip extension on the gooseneck.

Combined with the ability to run two additional axles in either a close coupled-position or as a separate axle group, Load King said these features ensure operators have the right combination of axles and spacing to legally haul their load.

The last eight inches of the trailer is recessed with pierced-steel plates, which Load King has said offers the lowest bucket well in the industry, and allows operators to keep their height down when hauling long reach excavators.

A push-pull, manual raise-and-lower valve reduces the likelihood of suspension damage, making it impossible for the bags to continue to over-inflate if the valve is left in the regulated position.

Load King President, Tom Norcross, said that there has been a resurgence of these gooseneck trailers, and since joining forces with Custom Truck One Source in December 2015, he has implemented customer-focused design changes to several of the company’s trailer lines.

“The LK503/605 SS SF is a manifestation of one key objective I indoctrinated at Load King my first day, which was to build the lowest deck heights and highest payload trailers in the industry,” said Norcross. “I knew this would empower customers to transport loads they never could before, and reduce the downtime and costs of additional permits, and pilot cars they required in the past.”

In August, Load King’s Sedalia, Missouri location was featured at the Sedalia Showcase. It opened a new facility at 5105 Pelham Drive in May 2018, which is located in Thomas Meadows Industrial Park.

“We’re honoured to be selected as this year’s Sedalia Showcase and have enjoyed partnering with the Sedalia and Pettis County Economic Development Office for this event,” said Load King Vice President – Operations Sedalia, Dan Nowlin.

For 14 consecutive years, community and state partners have joined forces during the Sedalia Showcase to highlight business opportunities available in Sedalia and Pettis County, Missouri. Organised as a strategic initiative of Economic Development Sedalia-Pettis County, the Sedalia Showcase was excited to feature Load King this year as a leading employer in the region.

“Sedalia and Pettis County are thrilled to partner with Load King to celebrate the launch of this new manufacturing facility,” said Executive Director of Economic Development Sedalia-Pettis County, Jessica Craig.