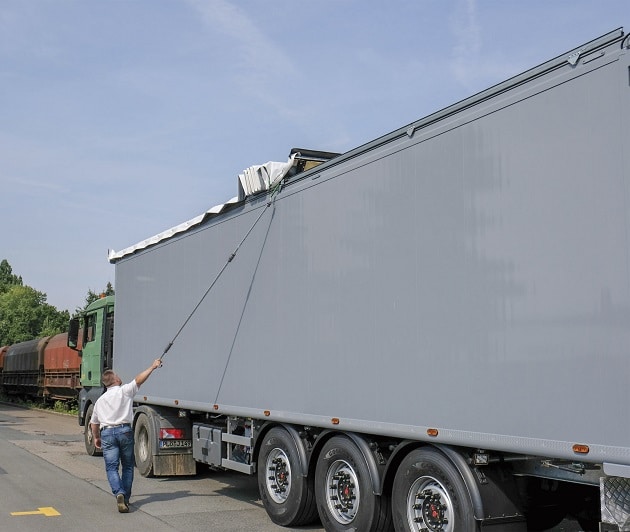 German OEM, Edscha Trailer Systems, has expanded its range of sliding truck roof innovations with the OpenBox and E-Drive.

OpenBox is designed for sliding floor vehicles and trailers with fixed wall structures while the E-Drive is a fully automatic system for the electrical opening and closing of a roof.

Sliding roof concept, TipperRoof, is tailored for modern dumper vehicles and laid the foundations for the development of a sliding roof for trailers with fixed wall structures. With the OpenBoxsolutions, Edscha Trailer Systems is now setting a further milestone in the manufacture of roofing systems that protect the payload from environmental exposure while also being fuel efficient.

The latter was proven by tests in a wind tunnel, according to Edscha Trailer Systems Area Sales Manager and Brand Manager, Roger Remmel. “Trailers with the closed OpenBox sliding roof are substantially more aerodynamic, offer less wind resistance and thus save fuel. The new OpenBox roof can be closed and opened quickly and safely by the driver from the ground. The robust structure stays smooth and sealed, even with bulges of up to +/-30 mm.”

The service-friendly modular structure, comprising steel rails and exchangeable segments, also reportedly reduces repair time. The heart of the structure is the floating suspension of the steel rail system, which has been registered for patent approval and is also used on freight cars.

Remmel said that Logistics 4.0, driverless transport systems, are taking over the loading and unloading of driverless vehicles, and this will render pull rods to be practically useless.

“The Edscha TS E-Drive takes over this job,” said Remmel.

“The electric drive is operated using an adjustable capstan winch. The system is operable at any time, almost wear-free, and has a manual emergency function. This modular concept, which has been registered for patent approval, allows adaptation to various structures.

“Controls for use with a hydraulic flap are integrated, too. Edscha TS E-Drive can be controlled as standard using a switch on the trailer and a switch in the cab with a tilt indicator and overload protection and with its own Android app via Bluetooth. A connection for external operation and a CAN-bus are also integrated.

“Another bonus is the low power consumption of under 20 amps at 24 volt, which is unique compared to its competition. Thus there is no problem connecting the Edscha TS E-Drive to the existing electrical system on the vehicle. No additional protection is necessary. Additional variations for further Edscha TS roofs are planned for the future,” he said.