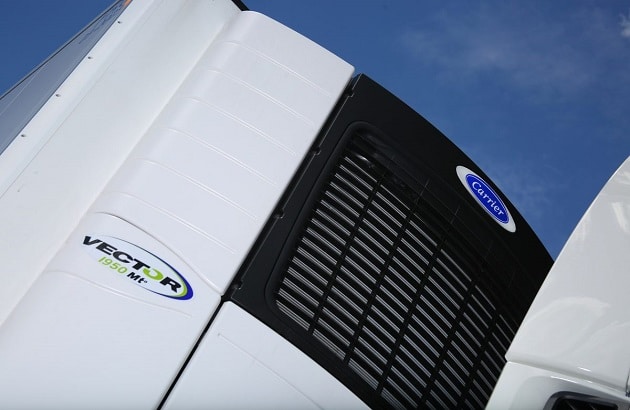 Carrier Transicold is celebrating the 20th anniversary of its industry-changing E-Drive all-electric technology, a patented innovation, which continues to deliver high standards of efficiency, reliability and performance to the transport refrigeration sector.

The innovative E-Drive technology, which is at the heart of Carrier’s Vector trailer and Pulsor van refrigeration systems and ECO-DRIVE GenSet power modules, removes mechanical transmissions found in belt-driven truck and trailer refrigeration systems and transforms engine power into electricity through a generator, thus reducing risks of leaks and emissions. This technology significantly reduces fuel consumption and results in a lower carbon footprint and quieter operation compared to diesel engine sound output.

“Carrier Transicold established itself as a true pioneer of next generation refrigeration technology when we created the first all-electric E-Drive system 20 years ago,” said Carrier Transiscold President of International Truck Trailer, Bertrand Gueguen. “As the technology has evolved over time, our customers are able to combine it with current and future sustainable energy sources to maximize overall efficiency and dramatically reduce the environmental impact.”

According to Carrier, E-Drive technology provides superior and reliable cold chain performance, making it suitable for the most temperature-sensitive goods, such as pharmaceuticals.

“Another benefit of the technology is electric-constant heating, which ensures maximum performance across multiple compartments even in extremely cold ambient conditions, when traditional systems can struggle to produce heat inside the trailer,” Carrier said in a statement.

“For light commercial vehicles (LCV), the Pulsor unit’s E-Drive technology provides consistent multi-temperature capacity at any engine speed – providing peace of mind that the refrigeration unit will maintain the desired temperature even when the vehicle’s engine is idling in heavy traffic.

“Two decades after its launch, E-Drive technology has helped many fleets reduce their environmental impact, while increasing unit uptime. The technology reduces refrigerant leak rates by up to 50 percent versus conventional systems that use standard technology, significantly cutting CO2 emissions.

“It also removes 17 serviceable parts from the unit, substantially reducing maintenance and downtime and helping to deliver precise temperature control of up to +/- 0.8 degrees Celsius. For one British supermarket, E-Drive contributed to an impressive 99.7 per cent average fleet availability over a 12-month period.

“Originally designed and launched on Vector trailer units, E-Drive technology was applied for use with LCVs with the launch of the Pulsor system in 2011. Later, in 2016, it was embedded into the company’s ECO-DRIVE GenSet power module, converting power from the truck’s engine into electricity to drive a new range of engineless refrigeration systems.”