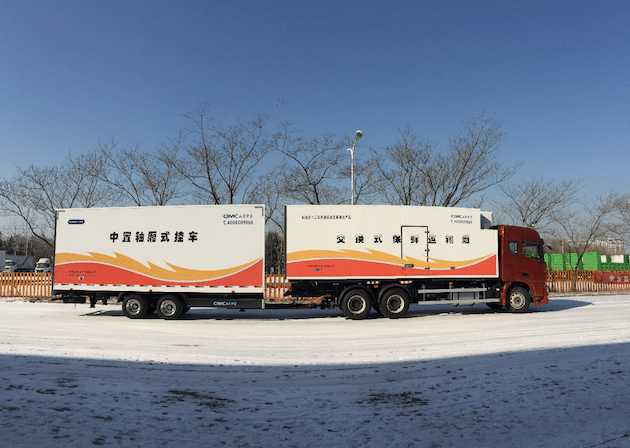 China International Marine Containers (CIMC) Group has released its financial results for the first half of 2017, reporting a revenue of almost €4.2 billion, up 40 per cent year-on-year.

According to CIMC Group, the net profit for shareholders and stakeholders neared €100 million, much higher than that in the same period of 2016.

CIMC’s main business grew significantly, especially the two largest business segments – Container and Vehicles increased by 105 per cent and 38 per cent respectively, which are major contributors to CIMC’s revenue and profit. CIMC attained a big revenue rise in China. Other regions of Asia and America are up 90 per cent, 75 per cent and 56 per cent respectively in America, China and other foreign countries.

“According to performance data, CIMC remains dominant in the global container market, and it is the world’s sole enterprise capable of independently designing and manufacturing 300-plus types of container product.”

According to the mid-year report of CIMC, global container transport grew more than expectation in the first half of 2017, contributing to a moderate reversal in supply-demand imbalance and rising freight rates. Customers purchased more new containers, as containers are in short supply presently and showcase a promising prospect. However, as the majority of container manufacturers in China began to introduce water paint into their production lines according to the industry’s self-discipline pact for environmental protection, the effective production capacity was affected. In addition, manufacturing cost started to rise in Q2, leading to a steady growth in container price in the first half of 2017.

The mid-year report of CIMC predicts global economy will continue to recover with growing international trade in the second half of 2017. Major securities institutions are all optimistic about container transport market and container demands in the second half of 2017 in their analysis reports. CIMC is expected to augment its container production capability in the future. The report reveals CIMC has increased HSE (Health, Safety and Environment) input in the process of container manufacturing, and new factories will be constructed. In addition, the project of new container factory in Fenggang, Dongguan, is under way and the Project Phase I is planned to be put into production in the beginning of 2018.

Vehicle business revenue neared €1.2 billion, achieving a record high. In the first half of 2017, CIMC’s vehicle business continued to grow robustly as it did last year and in Q1 2017, posting 38.6 per ccent revenue increase year-on-year and 57 per cent profit increase.

According to CIMC, vehicle business revenue reached around €1.2 billion in the first half of 2017, ranking second in the eight business segments of CIMC. CIMC Vehicles’ business revenue hit a record high on a semi-annual basis. Historical data showed Vehicles Segment’s annual business revenue peaked at €2.2 billion in 2011 – 90 per cent of which came from China’s market. A few years onwards, China’s market began to shrink, so CIMC expanded its vehicle business presence in north America, Europe, Asia and Australia based on the operation philosophy of ‘Global Operation, Local Wisdom’.

Overseas business makes up more than 50 per cent of Vehicles Segment.

Years of thoughtful planning and efforts have finally paid off in recent years, according to CIMC. In 2016, several business segments of CIMC grew slowly due to global macroeconomic environment, but vehicle business performed remarkably with 14 per cent revenue increase and 34 per cent profit increase. In the first half of 2017, the vehicle business performance remained impressive with a total of 81,500 units sold, up 39.9 per cent year-on-year, which has further consolidated CIMC’s leadership in the global semi-trailer industry. More importantly, its profit grew faster than sales and revenue, and the net profit arrived at €71.6 million in six months, up 57 per cent year-on-year.

“In the first half of 2017, CIMC Vehicles paid close attention to the policy of ‘stringent control on overloading and oversize’ in China and took advantage of lightweight product trend and upgrading, achieving 55 per cent of the projected revenue and profit of 2017; new factories were opened in north American market to boost production capacity, serve more territories and mitigate negative effects of periodic fluctuation; the century-old UK-based Retlan acquired by CIMC continued to collaborate with the other two production bases in Europe and took advantage of low cost to develop markets; among emerging markets of Asia, Australia and Africa, CIMC Vehicles grew rapidly in Malaysia, Vietnam and other countries along the ‘One Belt, One Road’,” said CIMC. “Thanks to effective collaboration in different markets, CIMC Vehicles thrived on the whole.”