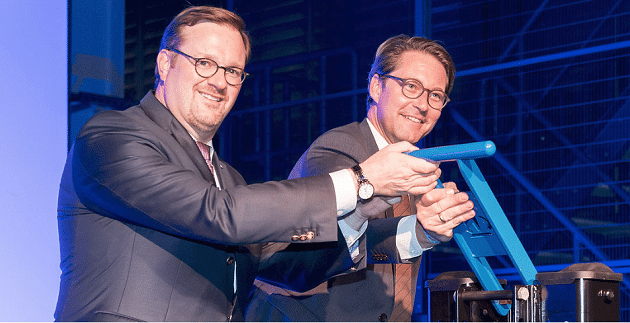 German trailer builder, Krone has officially opened the Krone Coating Centre (OFZ) at its Werlte site, as part of the 'Krone Future Lab'.

In the new 16,500-square-metre building, which is over 20m high, chassis for semi-trailers are cathodically dip-painted and powder-coated within seven minutes to provide maximum weather resistance and durability. With this plant, Krone has invested in state-of-the-art processes such as automation.

“The commissioning of the new Coating Centre is an important milestone in our quality offensive,” said owner, Bernard Krone.

“The new surface coating system is state-of-the-art, there is no more modern system in the world. The technology in the OFZ stands for an outstanding stable value of the vehicles produced here. Furthermore, with this investment, which by the way is the highest single investment in the entire Krone history, we are clearly committed to Werlte and the Emsland region.”

Federal Transport Minister, Andreas Scheuer, was reportedly impressed by the new OFZ due to its sustainable and energy-efficienct processes as well as its use of waste heat.

Per chassis, carbon dioxide emissions are reduced by more than 30 per cent per, according to Krone. At the same time, 12.6 million kilowatt hours of electricity are saved per year. The investment volume for the ultra-modern plant amounts to around €40 million. The resources and technologies used are constantly monitored and are incorporated into Krone's environmental management system certified to DIN ISO 50001.