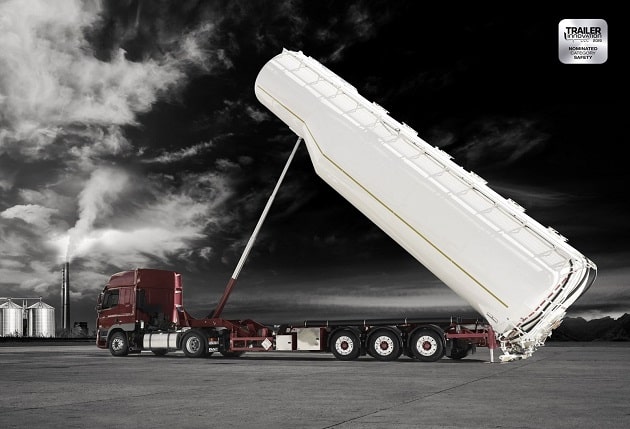 German OEM, Kässbohrer, has three vehicles in the running for the Trailer Innovation 2019 awards.

The first Trailer Innovation Award was presented in 2002. The purpose of the event is to credit innovations in the European trailer and bodybuilding industries

The innovation prizes are awarded in seven categories, including: 'Concept', 'Chassis', 'Body', 'Components', 'Safety', 'Environment' and 'Smart Trailer'. This year, Kässbohrer has been nominated in the Safety, Chassis and Concept categories.

The nominee of the Chassis category, Kässbohrer Multifunctional Container Chassis K.SHG AVMH, is the first of its kind with a novel octagonal central frame design, reportedly solving issues that have been common in the industry for over 30 years.

“The frame design with telescopic functions solves all torsional issues that lead to permanent damage of the vehicle, most common in the industry,” Kässbohrer said in a statement. “Multifunctional Container Chassis with novel octagonal central frame design also enables all welded components of the chassis to reduce all ancillary tension issues making the entire chassis tension free, preventing permanent damage arising from regular operations that are carried out with the industry standard rectangular central frame design. Front, middle and rear extensions and carefully designed locking mechanisms provide the most user-friendly operation, even for the average driver. K.SHG AVMH with innovative octagonal central frame design presents the solution to the issues that have not been overcome over 30 years.”

The Nominee of the Concept category is the Kässbohrer Smart Non–Tipping Silo K.SSL, with the autonomous discharge innovative feature that enables a safer and more efficient discharge.

“The fine example of digitalisation of trailers, Smart Non-Tipping Silo eliminates the classical discharge methods by patent-pending digital control system compliant with ISO 26262 functional safety standardisations including the software and the hardware,” said Kässbohrer. “The system is controlled by smart devices via easy to use interface running on Kässbohrer Digital Trailer Control, resulting in safer, more efficient time- saving cost reduced operations. Building towards full predictive maintenance, integrated diagnostics systems can easily detect failures that can occur anywhere on the tank body or running parts of the trailer and it makes early intervention and response to these failures possible. Thanks to that process, safer driving experiences, shorter interference times and longer trailer life will be achieved.”

The nominee of the Safety category is the Kässbohrer Safety Tipping Silo K.SSK’s complete wit automated discharge process with safety parameter controls, improving the safety of the discharge operation of the silo.

Last year, Kässbohrer was recognised in the safety category for its security bitumen tanker.

The winners of the Trailer Innovation 2019 awards will be announced at the IAA Commercial Vehicles Show in Hannover at Convention Center 1B, 21 September 2018 at 2pm.