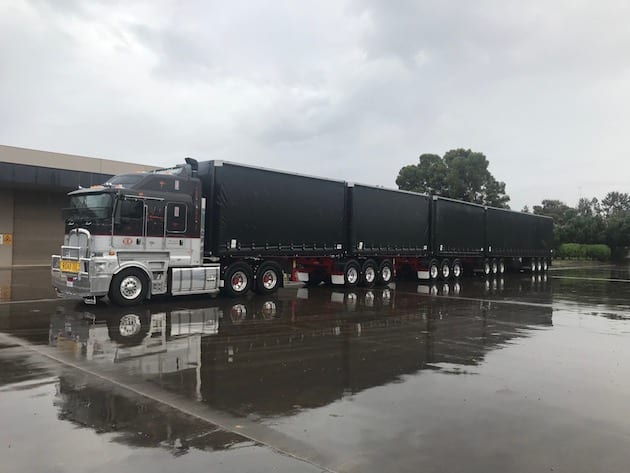 Victorian fresh produce business, Rocky Lamattina & Sons, prides itself on processing upwards of 600 tonnes of product per week, and specified the B-Quad to maximise its carrot cartage operations between Victoria and Queensland.

The National heavy Vehicle Regulator (NHVR) told Prime Creative Media that this B-quad is the first to be approved under PBS high productivity scheme on public roads in Australia, with a General Mass Limit (GML) of 103 tonnes and a Higher Mass Limit (HML) of 105.5 tonnes. The B-quad PBS design has previously been used for mining applications on private roads.

The 'Be Road Ready For Harvest' Field Day will kick off with a free breakfast at 8am and includes a session, which will explain why there are notices, how they are developed and provide an update on the National Agricultural Machinery Notice.  Attendees will then take part in an interactive machinery inspection to clarify what the requirements are for various vehicles and combination dimensions, safety equipment and pilot/escort vehicles.

This year the field day will be followed by a PBS vehicle demonstration, which commences at 12.30pm after a BBQ lunch.

The PBS vehicle demonstration will include a presentation, a moving display and an inspection of the vehicles, providing an opportunity for council representatives to discuss the heavy vehicle needs of their economies with the National Heavy Vehicle Regulator (NHVR) and the transport operators that use these vehicles.

NHVR Manager of Stakeholder Relations, John Gilbert, said a recent report found that PBS vehicles were involved in 46 per cent less crashes per kilometre travelled than conventional vehicles and their reduction in truck trips equated to an estimated $65 million reduction in road maintenance in 2016.

“The innovative heavy vehicles approved under the NHVR’s Performance-Based Standards scheme can make a huge difference to the productivity and safety of Australia’s growing freight task,” said Gilbert. “Come along to see these PBS vehicles in action and speak with the operators of these vehicles to see what difference they could make to your business and local economy.”