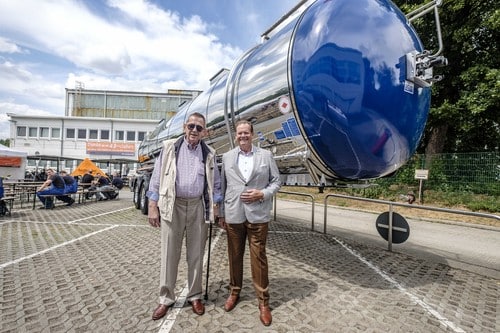 Site Manager, Peter Boost, opened the farewell speeches on behalf of the new management team, and presented a small vehicle model in memory of the co-founders’ achievements.

Works Council Chairman, Jörg Bauer, reportedly spoke of “heart and passion” with which Otto Feldbinder and Jan-Dirk Beckmann steered the company through good and difficult times. He then unveiled a gift for the employees: a large-format picture of the Wittenberg workforce.

Dirk Feldbinder spoke to the two representatives of the new business. With wit and irony, he presented a token for the company's canteen for the past 43 years.

Otto Feldbinder said goodbye with a few, heartfelt words. Visibly touched and proud of what he has built up with Jan-Dirk Beckmann not only in Lutherstadt Wittenberg.

“We old people say thank you today,” said Jan-Dirk Beckmann in his farewell speech. He wished all employees good luck and good health before opening the grill buffet. “We've packed it now.”

“On behalf of the new management and the workforce, we wish our company founders good health and enjoyment of life,” FBB Feldbinder said in a statement.

Feldbinder and Beckmann founded FFB in 1975 and have since grown it into a European powerhouse producing more than 2,000 units annually for both road and rail transport. The company’s speciality is lightweight dry bulk tankers made from aluminium.

The new leadership team has announced investments of up to €25 million in the coming five years.