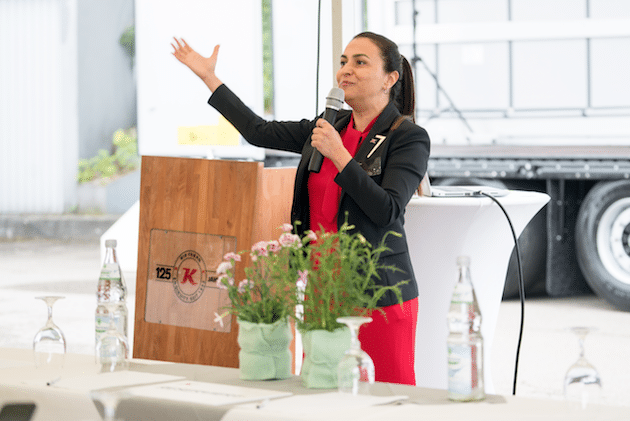 “Today we are here not only to celebrate 125th year of Kässbohrer but also to discuss the next 125 years of our industry,” Kässbohrer Board Member, İffet Türken (pictured), said in her welcome speech.

The celebration continued with the speech of Mayor of Achstetten, Kai Feneberg. “Undeterred, continue what has proven to be a good tradition; use forcefully what their typical strengths are; implement emphatically in what you see your sustainability; make the most of what is needed to continue on the road to success. That is Kässbohrer for us and we’re proud to have Kässbohrer in our region,” the Mayor said.

Moeini reframed Internet of Things (IoT), big data, connectivity, machine learning within the scope of current digital products, comparing the innovation culture of corporations and start-ups; he introduced how the two cultures can complement each other for future success in innovation.

The program continued with Aeroflex Project Coordinator Ben Kraaijenhagen’s presentation which included the roadmap to sustainable transport, decarbonisation and automation within the scope of European Union’s sustainability targets.

Kraaijenhagen stated that the goal of this program, which is supported and funded by the European Union, is to develop and demonstrate new technologies, concepts and architectures for complete vehicles meeting future logistics and co-modality needs and a clear focus on zero emissions is a must.

“In one of the most important manufacturing centres in this region, we’re proud to live with the confidence of working with Kässbohrer, one of the most important companies in the logistic industry in all Europe,” said Marongiu. “We are confident that this trust relationship will help both to contribute to the employment in the region and to continue pioneering the development of the industry.”

During the two-day event, a problem wall enabled an interactive discussion with start-ups, industry experts and guests. Customers, suppliers, academics and the media all had a chance to evaluate their needs and current challenges within the scope of automated driving, connected vehicles, urban logistics as well as transport services that are increasing accessibilty through smart devices.

On 14 June, Kässbohrer unveiled a tipper from its historical collection which was manufactured in 1938. Retired Kässbohrer employee, Erhardt Schneider, shared his experience.

“As a 19-year-old young and unexperienced guy, I was highly impressed about all the innovations Kässbohrer introduced in the market,” said Schneider. “Today, after so many years, I still feel excited and my heart beats full of pride when I see the Kässbohrer name on the streets. After visiting Kässbohrer’s main production plant two years ago, I am convinced that Kässbohrer has all the capacity and vision to continue on this heritage and be the best trailer manufacturer in years to come.”

Kässbohrer's said in a statement that its strength lies within its production facilities equipped with high technology.

“The location and qualities of these production facilities came as a result of comprehensive strategic planning. Kässbohrer has four different plants; two in Europe, one in Russia and one in Turkey.

“The headquarters of the western European operations is located in Goch, Germany, where Kässbohrer anchors at the heart of intermodal transportation and easily access to neighbouring countries outside Germany. The location can be described as ‘Europe’s gateway to the East and to the world’. The second production site in Germany is located in Ulm and started its operations as of 2017. With this new plant, Kässbohrer returned back home, where it has been founded in 1893,125 years ago. Being the pioneer of innovations, the company aims to meet customers’ needs as fast as possible as a final achievement to round off last year's achievements.

“The company also opened a manufacturing plant in Tula, Russia in 2012 and continued production from there. The city of Yasnagork in the Tula region of Russia was carefully chosen. It is located 140 km away from Moscow. The presence of heavy industry and locomotive maintenance factories in the city enabled Kässbohrer to show its quality as fast as possible.

“Lastly, the biggest Kässbohrer plant is located in Adapazarı, Turkey.”

Kässbohrer is one of the longest established trailer builders in Europe; the foundations which were laid by Karl Kässbohrer back in 1893 in Ulm, Germany.

“The first Kässbohrer motor vehicle had already been produced in 1907 and continued by the production of the first 2×4 axle trailers,” said Kässbohrer. “Karl Kässbohrer started to build the first tank semi-trailers in the early 1930s. In 1931, Kässbohrer applied for two patents, which changed the dynamics of vehicle production. One of Karl Kässbohrer’s patents was about semi-trailer coupling, which was extremely reliable and low-maintenance that it paved the way to three-axle semi-trailers. Kässbohrer coupling changed the course of whole transportation industry. The other one is the production of very first Low-bed with 12-tonne capacity. In addition, Kässbohrer started to produce semi-trailers for challenges such as transportation of liquid chemicals and heavy abnormal goods. Also first low-bed with 40-tonne capacity is manufactured in 1938. In October 1953, the first silo semi-trailer with hydraulic tipping system was introduced to the sector.”

Since 2002, Kässbohrer’s corporate motto is Enginuity. Derived from engineering and ingenuity, the motto is summarised as the perfect balance between the two.

Kässbohrer recenty signed a new agreement with global technology specialist, Wabco, for a telematics system to improve the safety, efficiency and connectivity of commercial vehicles.