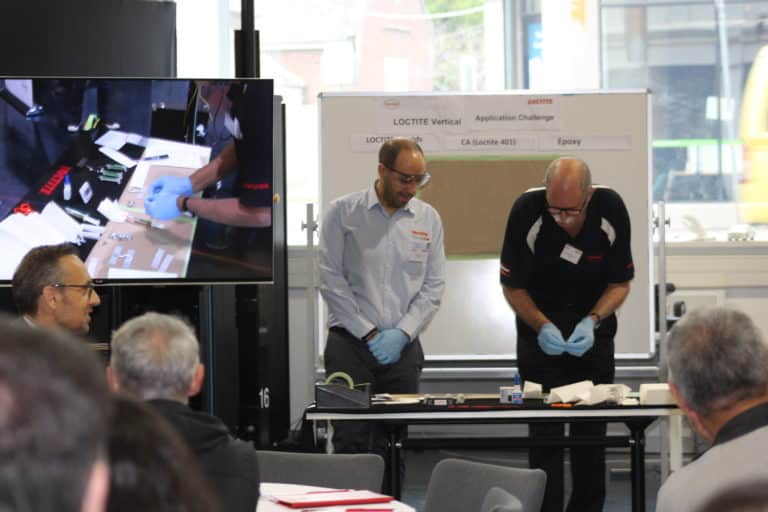 Global adhesive manufacturer, Henkel, hosted an exclusive breakfast event in Melbourne earlier this month to identify cost-saving solutions via the efficient and effective use of LOCTITE sealants and adhesives in industrial assembly and repair.

The event, titled ‘Limitless Bonding’, was participated by senior industrial designers, maintenance managers and engineers and focused on how manufacturers can benefit from latest advancements in adhesives to improve efficiency in their processes.

Henkel’s patented hybrid adhesive technology combines the most critical attributes of a cyanoacrylate – fast fixture time and substrate versatility – with the advantages of using a structural epoxy: high bond strength; temperature, environmental and impact resistance; and the ability to fill gaps up to 5mm.

The hybrid adhesive technology has been used by Henkel in its LOCTITE Universal Structural Bonders range of adhesives, which allow manufacturers to overcome limitations by increasing manufacturing speeds and assembly durability.

In his welcoming address, the director of the Factory of the Future, Professor Nico Adams, noted that businesses should focus on taking advantage of the digital economy. As a former CRISO scientist and leading industry expert in Industry 4.0, he elaborated that sealants and adhesives are trending, particularly in robotics.

“Many manufacturers are now tasked with assembling products on behalf of the customer. Our ambition at the ‘Factory of the Future’ is to work with manufacturers to increase operational efficiencies across production lines via the implementation of new materials, upfront product design as well as smart robotics and patented manufacturing. A lot of these trends rely on the efficient use of adhesives in the manufacturing process,” said Adams. In this context, it should be noted that Henkel is currently developing adhesives for 3D printed materials.

Daniel Rudolph, Henkel president and Head of Adhesives for Australia and New Zealand, said the company acquired LOCTITE in 1997, and the launch of its new LOCTITE hybrid adhesive technologies was another milestone development toward solving design challenges for our industry partners.

In an exclusive live demonstration of the new LOCTITE hybrid technologies, Henkel’s head of technical services for Australia and New Zealand, Michael Hajj, said that there are better options now available for high-strength bonding on a variety of substrates.

“Based on industry feedback and ongoing innovation, Henkel identified three challenges that needed to be addressed: production delays as a result of protracted fixture times; limitations with design, especially when bonding two dissimilar substrates; and providing products that are safer to work with.

“To address these concerns, Henkel merged two different technologies to create fast curing adhesives with gap-filling capability, offering great structural performance on plastic, rubber, metal and other materials,” he said – explaining that LOCTITE HY 4080 has been optimised for products in the 3D printing space whereas LOCTITE HY 4090 has been developed with good moisture, chemical and temperature resistance (up to 150°C).

After the live demonstration, the attendees, including senior industrial designers, maintenance managers and engineers, researchers from Swinburne participated in roundtable discussions to share their thoughts on the challenges that businesses face in industrial repair and assembly. A speaker from each table debriefed, highlighting the benefits of incorporating LOCTITE products into manufacturing processes. Based on roundtable feedback, the main talking points were product reliability and versatility as well as optimal OH&S when handling and applying the hybrid adhesive technologies.