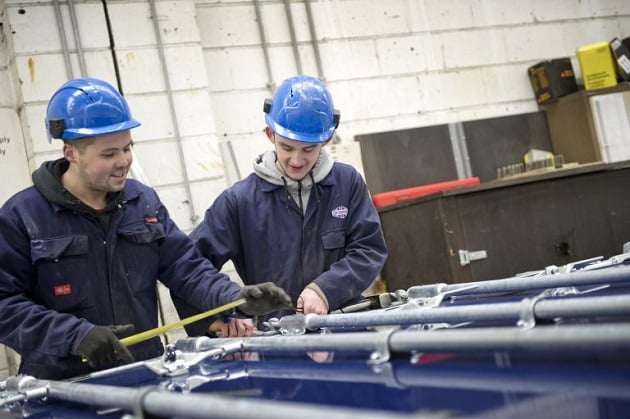 The group, based in Altrincham, celebrated its largest intake of apprentices last year as the scheme has established itself as a popular option for young adults looking to learn a trade.

Launched in 2012, the scheme was the brainchild of Cartwright Group chairman, Peter Cartwright, whose own career began with an apprenticeship. It has grown exponentially in recent years with excellent partnerships with local colleges, providing training and qualifications as part of the programme.

Among those who have developed their career with Cartwright is Joel Dover, aged 20, from Stockport – a fourth year apprentice who specialises in welding. He has completed his Level 2 NVQ and is now working towards Level 3.

“I came here when I was 16; it was a really new environment and I was overwhelmed at first,” said Dover. “As I worked through my apprenticeship I would sometimes work with one of the apprentices who was a year older than me. He helped me quite a lot and it was good for me as I learned a lot from him. Now I try to help the younger apprentices myself.”

Sam Clayson, aged 23, is a fourth-year apprentice electrician with Cartwright and is working towards Level 3 of his NVQ.

“I have got a lot out of my apprenticeship and I think I have done really well out of it,” said Clayson.

“I didn’t really have the discipline when I started here. But with the nurturing I have received – the best mentors I have had have been apprentices themselves. They have given me massive confidence and life experience and I now realise that I can do things for myself. It’s an honest day’s graft and gives you a great platform from which to launch your career,” he said.

As part of the scheme the apprentices spend their first year trialling the different departments along the production line, allowing them to experience every stage of the manufacturing process before selecting an area in which to specialise.

According to Cartwright, the apprenticeship gives them a comprehensive set of skills in a range of areas including welding, hydraulic, electrical and air fitting and testing, general fitting and assembly, machine operation, finishing and pre-delivery inspection. This year the course has also introduced ‘design’ to the scheme, giving apprentices a greater understanding of Computer Aided Design (CAD) which has proved instrumental to their understanding of the manufacturing process.

“Since the launch of our apprenticeship scheme in 2012 we have recruited many talented people,” said Chairman, Peter Cartwright. “It has been excellent for them in terms of building solid foundations at the beginning of their careers, and it is excellent for Cartwright as the skills and experience of our older employees is passed on to the next generation, ensuring the long-term future of the company.”