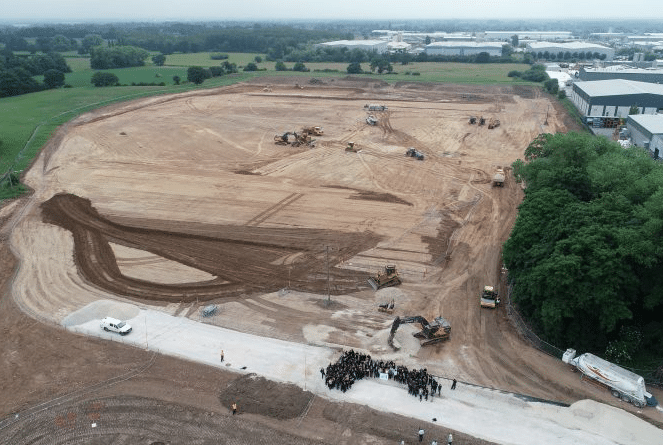 UK-based OEM, Tiger Trailers, will reportedly double its annual production output to around 3,000 trailers and bodies, plus create a further 120 skilled jobs over the next three years following the construction of a new factory in Winsford.

Joint Managing Directors John and Steven Cartwright said the business is outgrowing its current production facility, and the new site will speed up delivery times and enable it to branch out into new sectors – including the country’s booming home delivery vehicle market, as well as temperature-controlled bodies and trailers.

Production temporarily halted for an hour on 8 June so Tiger’s 180 staff, alongside local Member of Parliament, Antoinette Sandbach, could take part in the breaking ground ceremony off Road One on the Winsford Industrial Estate, less than a mile from the current plant.

“Today was the start of a new chapter in our history and we wanted to invite everyone on the team to be part of it,” said John Cartwright. “We’ve been planning this factory for almost two years; we’re now only six months away and we can’t wait to realise its full potential.”

“Our pace of growth has been pretty remarkable for a UK-based manufacturer, driven by customer demand both domestically and within Europe,” said Cartwright. “We’re confident about what the future holds, and excited about the wider opportunities the new factory will bring – including options to extend beyond our current dry freight product range.”

Construction firm Bowmer & Kirkland will now lead an estimated 27-week build and fitting-out phase for the 15607 square metre site, enabling Tiger to turn its attention to growing its workforce in time for the transfer into the new factory. The company has an immediate requirement for 40 new members of staff, including 20 apprentices.

“We elected to remain in Winsford as we’ve built up a fantastic team who we wanted to retain, plus we are also well positioned for attracting new talent from across Cheshire, Staffordshire, Lancashire, North Wales, Merseyside and Greater Manchester,” said Steven Cartwright.

“There’s currently huge interest in the brand, the fact we’re part of the Northern Powerhouse Partnership and that, very soon, we’ll have the most modern trailer manufacturing facility in the country.

“The working environment on the shop floor is incredibly important to us, and in a little over six months’ time we’ll have the best in the industry,” he said.

Tiger plans to commence the transfer of existing equipment into its new home during late-December and early-January, once the new paint booths, shot blasting booth, cranes and materials handling equipment has been installed.

The new building will utilise energy efficient heat pump heating and cooling systems, as well as high efficiency LED lighting throughout the offices and production area, each with automated lighting controls. Natural ventilation will be boosted by a super-efficient heat recovery ventilation system, which is to be employed within the offices, while gas-fired radiant heating will be used throughout the production area – ensuring the facility gains an overall ‘A’ rating for efficiency.

Upon completion of the new site local wildlife will be encouraged to colonise the greenspace and pond area, plus sensitive lighting principles are being implemented, including the use of hoods on external columns lights to direct the light downwards, minimising disturbance to nearby foraging bats. Bat and bird boxes will also be installed on adjacent trees to provide new roosting and nesting opportunities.

The company’s initial €24.9 million investment is privately financed – equally by shareholders and bank support. The site includes provision for a second build phase which could be accommodated in the future, increasing production capacity to approximately 5,000 trailers and bodies per year, without disruption to existing production.