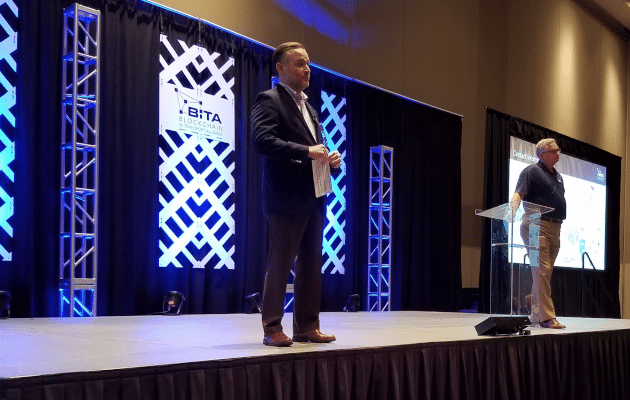 Members of the Blockchain in Transport Alliance (BiTA) will have the opportunity to participate in new think tanks as part of the effort to develop blockchain outcomes for the road transport industry.

The announcement of the think tanks was part of an Alliance update provided by Chris Burruss, President of BiTA, and Mitch Hixon, Vice President – Membership Engagement, during the opening session of the BiTA Spring Symposium, recently held at the Georgia International Conference Center in Atlanta, US.

“Now is our time, [but] who is our?” Hixon asked the 371 registered attendees. “It’s not BiTA, but the industry, collectively.”

Hixon repeatedly emphasised that BiTA works for its members and the new think tanks would follow that same path. “I can’t lead and influence, I can only moderate,” he said – adding that the concept behind the think tanks is to “identify and further identify the pain points”.

Hixon said the think tanks will work closely with the BiTA Standards Council as they work through the industry pain points. Each think tank will have nine participants “to define issues for potential blockchain solutions”.

“The success of the groups will come from us, from you,” he told the audience.

The five think tanks are:

The risk management and finance/business administration think tanks will kick off on June 1; the supply chain marketplace think tank will begin on 8 June and the remaining two will start on 15 June. Hixon said there are still opportunities for BiTA members interested in joining one of the think tanks to get involved.

“We’re coming to the end of Phase 1 [of BiTA], which was the establishment of the organisation,” he said. “We’re moving into Phase 2, which is turning it over [to members].”

Before Hixon took the stage, Burruss provided a quick update on BiTA and announced the official launch of the BiTA Standards Council.

“Standards are important because if industry doesn’t set the stage for success, what happens?” he asked. “Government gets involved and that’s something we don’t want to happen.”

The development of a separate Standards organisation is part of the goal to ensure BiTA meets member needs, Burruss noted. “One thing that is clear to me [from my career experience] is that standards get lost in the larger organisation,” the veteran association leader said. “We don’t want to see that happen to BiTA.”

The Standards Council will work to:

• Improve trust and enable transparency in the field of transportation logistics.
• Drive technological efficiency, ideally resulting in cost savings for those who adopt the approaches defined by BiTA.
• While not defining a single technology solution, BiTA will seek interoperability and compatibility between solutions used across the industry.

BiTA announced earlier this year that BiTA Standards will be open and free to use for anyone interested. There will be no licensing fee or any other requirement for their use. There should be some standards published before the end of the year, Burruss said, probably focused on the data side initially.