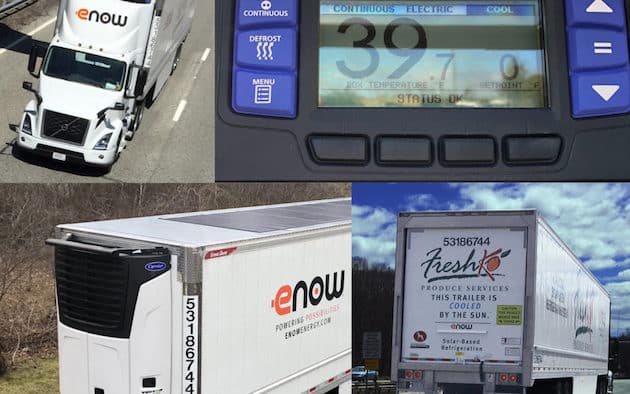 “In the first five months of testing, emission reductions of 98 per cent nitrous oxide, 86 per cent carbon dioxide, and 97 per cent particulate matter were achieved,” eNow said in a statement.

“TRUs are refrigeration units mounted on trucks and are traditionally powered by high-polluting, small diesel engines to provide the needed cooling to transport chilled products. The Rayfrigeration TRU is the first-to-market battery powered unit for commercial use and was tested on a Challenge Dairy Class 7 truck delivering fresh dairy products throughout Fresno.

According to eNow, its team calculated that average carbon dioxide emissions over a four-day week with an average delivery day of 7.7 hours was reduced from 1,145 kilograms/week to 72 kilograms. Nitrous Oxide emissions were reduced from 7162 grams to 1.

In addition to eliminating harmful emissions, the Rayfrigeration unit was projected by eNow to reduce operations and maintenance costs by up to 90 per cent over a diesel-powered TRU.

Throughout the testing cycle, the 1,800 Watt eNow solar system provided more than enough energy to maintain optimum temperature throughout a typical day of continually opening and closing the doors while delivering fresh dairy products in California’s summer heat.

“The Rayfrigeration product is an important step forward in reducing emissions while maintaining the highest levels of efficiency and customer satisfaction for companies delivering perishable goods,” said eNow President and CEO, Jeff Flath. “eNow’s solar technology is powerful, reliable, and efficient, and more than up to the task of providing emissions-free energy for critical tasks such refrigeration of fresh foods, even the most challenging conditions. We are proud to be a part of this important project.”

The innovative business has focused on the transportation industry since 2011, and also builds solar-based power systems for in-cab HVAC and hotel loads, lift gate battery systems as well as telematics that require an energy source to ensure auxiliary batteries are always charged.