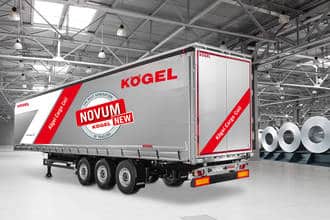 German OEM, Kögel, has optimised the external frame profile and body characteristics of its Cargo Coil and Cargo Coil Rail builds with its NOVUM-generation semi-trailers.

According to Kögel, the tare weight of the new models is up to 150 kilograms lower than the previous generation. The empty Cargo Coil trailer with its basic equipment reportedly weighs 6,650 kilograms, and the Cargo Coil Rail, 6,900 kilograms. Compared to the old generation, the new 435-millimetre-high side member not only accommodates a higher payload but also provides the benefit of greater overall height with the same body height

The NOVUM-generation Cargo Coil and Cargo Coil Rail have a sturdy, torsion-resistant welded frame with full-width crossbeams for high payloads and concentrated loads. Coils and split strips with a diameter of 900–2,100 millimetres and a maximum distributed load of 30 tonnes can be transported, evenly distributed over one and a half metres in the 7,200-millimetre-long standard coil trough. To secure loads, two pairs of stake pockets are fitted as standard in the coil trough, one pair at the front end of the trough and another at a distance of approximately 2,050 millimetres to hold square pipe stanchions.

Kögel said in a statement that its customers also have the option of five or eight pairs of stake pockets in the coil trough, as well as eight pairs in the external frame, and two or four as a front wall alternative. Vehicle stability is further boosted by a new, slimmer yet stronger rear cover plate, as well as the new air and lighting console on the front wall, which transfers forces along the side member to the frame. The new external frame profile greatly increases the accessibility of the VarioFix lashing points, allowing the cargo to be lashed to the VarioFix perforated steel external frame with the tarpaulin closed and also in combination with the optionally available drop sides. When using belts with claw hooks, the drop sides need to be open to attach them. The drop sides can remain closed when attaching belts with flat hooks. The 13 pairs of lashing shackles included as standard are now available with grip hooks at the sides for easier handling and have a tensile force of 2,500 or 4,000 kilograms respectively. The gripper edges integrated into the frame, a gripper jaw tarpaulin protection made from aramid fabric and special axles in a rail design allow loading the Cargo Coil Rail onto rails. This design makes the trailer ideal for flexible loading on the most prevalent rail pocket wagons.

In the basic design of the Cargo Coil and Cargo Coil Rail, the front wall, including the front volume corner posts, the rear corner posts, and the rear wall door portal, is made of aluminium. The standardisation of the corner posts with and without a lifting roof provides a whole raft of benefits. It saves weight, particularly in conjunction with a lifting roof. It is also reportedly is easier to position pallets along the front wall with side loading. Furthermore, all the drop side spacing is now a standard size on these NOVUM-generation vehicles.
The Kögel Cargo Coil is equipped with Kögel Trailer Axles (KTA) as standard.