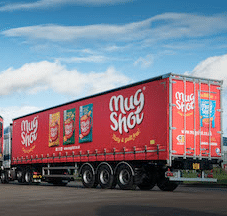 Longs has worked for Symington’s for a decade, with the contract renewal seeing Longs handle 12 loads a day for the food manufacturer, picking up from its warehouse and delivering to major retailers nationwide.

“Symington’s prides itself on delivering best in class service to all of its customers,” said Symington’s Chief Executive, John Power.

“Longs play a big part in this and we are delighted to have them alongside us, especially with our major brands Mug Shot and Naked Noodle displayed on their brand new trailers,” he said.

“We’re delighted to continue our relationship with Symington’s and to help maintain awareness of two of its best-known brands via the trailer liveries,” said Longs Director, Andrew Long. “Working with Ryder ensures we have peace of mind, allowing us to concentrate on delivering the best service we can to Symington’s.”

“The contract renewal is great news for Longs and we’re delighted to be able to help our customer do their best for their customer,” said Ryder Sales & Marketing Director,  John Murray.