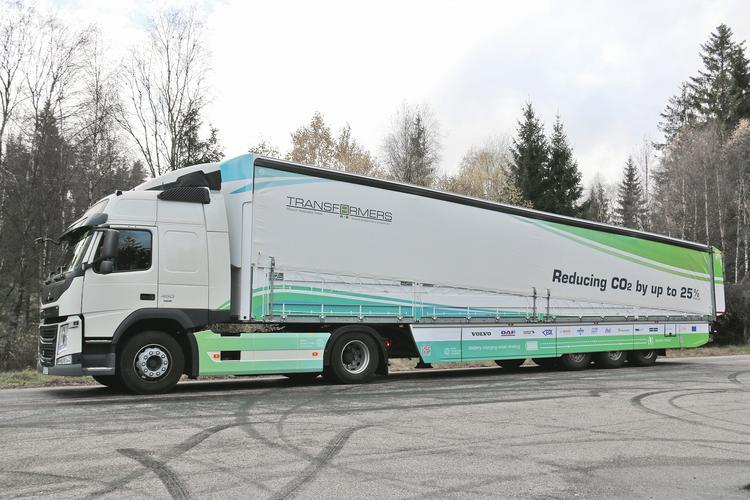 Schmitz Cargobull has taken the covers off a new, energy-efficient trailer concept inspired by the European Commission’s ‘Transformers’ initiative.

The initiative, which was developed in a move to streamline the design of innovative and energy-efficient trucks and load carriers across the Eurozone, came to an end in late 2017 and earned Schmitz Cargobull the European Transport Award for Sustainability upon conclusion.

According to the German OEM, the award-winning concept vehicle may be able to reduce CO2 emissions by up to 25 per cent in comparison with a conventional trailer – at least if used in combination with an energy-efficient truck.

“For the base, we used a classic curtain-sider equipped with an electric powertrain and energy recuperation system,” explained Roland Klement, Board Member for Research & Development at Schmitz Cargobull.

“Thanks to the built-in battery and electric motor, power is transferred via the gearbox and prop shaft down to the drive axle, providing electrical propulsion for ‘hybrid on demand’ operation.”

The battery, with a capacity of 22kWh, has been installed between the l-beams to ensure it is protected against impact, according to Klement.

“The electrical system can achieve an output of up to 80 kW and maximum torque of 200 Nm. The hybrid drive adds an extra 1,140 kg to the total weight.”

The bulkhead, side and rear cladding, as well as the trailer roof were aerodynamically optimised, he added. “When we started developing the prototype, we didn’t set out to build a one-off.

“Instead we used a standard trailer as our basis along with adapted production components. As a result, it could pass through the standard production process and meet all the requirements for road approval.”