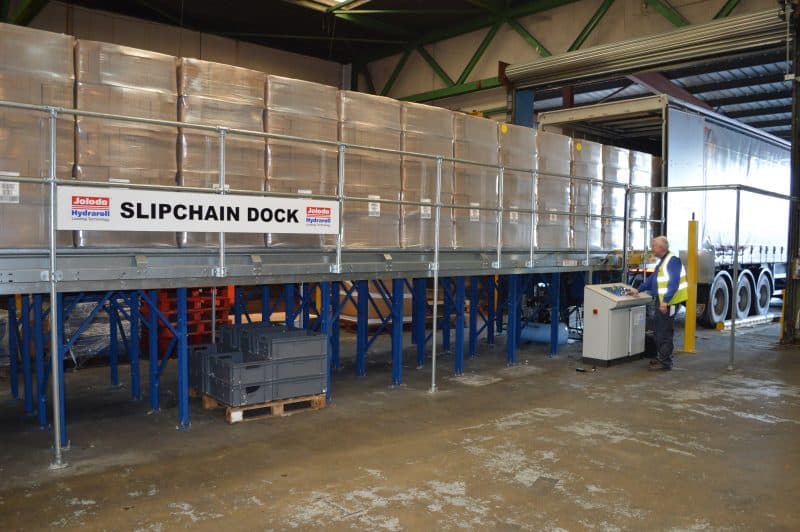 Designed to streamline logistics between Lanchester Wines’ four warehouses in the north-east of England, which handle around 2,600 pallets of wine a day, the 13.7m tri-axle trailers feature a special conveyor system supplied by British moving floor specialist, Joloda.

“Joloda’s Hydraroll system features a moving slipchain floor built into the loading bay that extends into the trailer itself, creating a seamless transition between the two,” Tiger Trailers explained in a media briefing.

“The system is capable of loading or unloading up to 24 pallets of wine in as little as 80 seconds, a process that previously took 40 minutes – equating to a time saving of 97 per cent per load.”

According to John Mitcheson, Logistics Manager at Lanchester Wines, the £450,000 (€506,000) Joloda system is the first of its kind for a UK wine business – even though it is already in use with more than 500 other companies worldwide, many of them in the food and beverage industry.

“The system means that while our vehicles are on the road, our warehouse team are able to pick and prepare the stock ready for instant loading when the driver returns,” he explained.

“Installed across all of Lanchester Wines’ warehouses, this system radically reduces driver downtime and increases efficiencies, which are in turn passed on to our customers.”

By integrating Jolada in the design process early on, Tiger Trailers was able to incorporate the company’s Hydraroll system into the chassis itself, protected by a custom-made under-run bar and solid steel reinforcement along the side rave.

According to Mitcheson, both new trailers operate on a single shift pattern, travelling up to 250 miles (ca. 400km) a day, five days a week. However, the system is so efficient that the current shift pattern could be doubled or even trebled in the future as the business grows.

“The new trailers effortlessly handle around 15 loads a day between the four sites, carrying up to 24 pallets on each trip,” he explained.

“As the company continues to expand and the volume increases, we’ll certainly be looking at installing additional Hydraroll systems to the loading bays across our sites, which in turn will require a few more specialist trailers in order to maximise efficiency.”