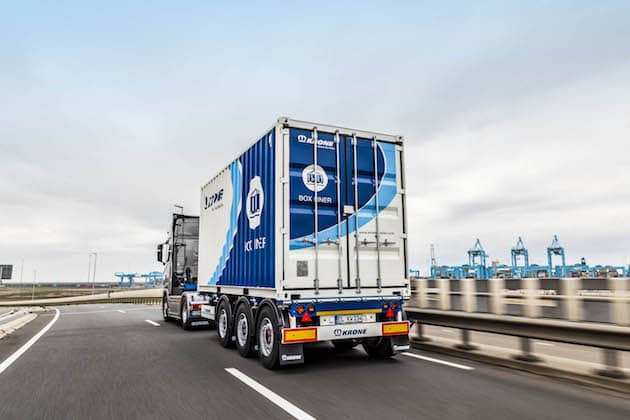 According to Krone, it uses higher strength steel but even so, the chassis weighs only 4,600 kilograms and owing to the flush-fit container positioning, weight distribution is significantly better than comparable container chassis.

Frankfurt-based intermodal operator, Kombiverkehr, has reported a payload advantage of almost one tonne using a 20-foot container and Krone Box Liner chassis with a 6-tonne fifth wheel load, operating at a gross vehicle weight of 28 tonnes.

Weight saving is reportedly due mainly to the compact rear-end design, although Krone has not compromised on strength: the longitudinal beams are constructed from 40mm high-grade steel and the 20-foot container is positioned further forward which brings the center of gravity closer to the kingpin.

Krone has invested about €8.5 million in a new distribution centre, responding to demand for parts in the commercial vehicle sector.