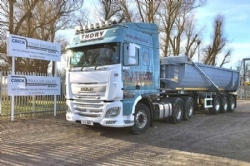 According to original equipment manufacturer, Dennison Trailers, Edward Thory of PJ Thory invested in the new tippers after seeing them being used on the A14 road project.

“Specifically designed to compete against 8×4 rigid tippers, the sliding-bogie trailer is said to offer a tighter turning circle and greater stability when tipping,” Dennison Trailers said in a statement. “Moreover, the trailer can carry up to 50 per cent greater load, thus reducing vehicle movements and improving and fuel costs for comparative loads.”