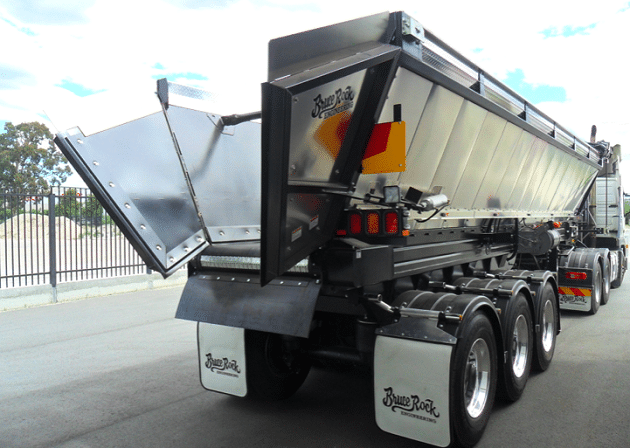 “The Etnyre Falcon complements our own range of Bruce Rock side- and end-tippers by offering clients a solution to some specific bulk haulage challenges such as unloading on difficult terrain or near overhead infrastructure,” said BRE Managing Director, Damion Verhoogt. “Rather than tipping, it uses a hydraulic-driven conveyor to unload the product so there is little to no risk of rollovers during unloading cycles.”

Live bottom trailers are being increasingly used at large infrastructure projects where safety demands are high, according to BRE. As a non-tipping trailer, the Falcon can deliver materials to challenging sites such as hilly or uneven ground, allowing for safer unloading of materials such as organic fertilisers which are at greater risk of causing rollovers.

The live bottom trailer’s saloon-type doors reportedly deliver a more regulated flow of material when interfacing with the paving machine.

“Operators can also vary the unloading speed and stop product delivery during the unloading cycle,” said Verhoogt. “All Etnyre Falcons distributed by BRE are supported by our full-service repair capability and spare parts inventory.”