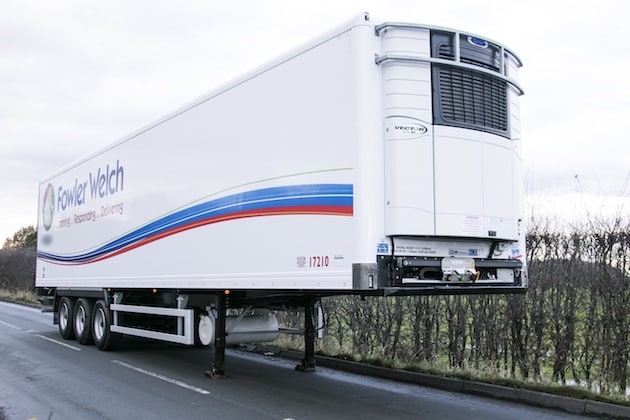 The 13.6m straight frame tri-axle, semi-trailers have 26-pallet specification with a heavy-duty (ISO 10496 tested) chequer plate aluminium floor overlay, according to Cartwright. Also, the refrigerated trailers have a lighter weight advantage with Cartwright engineers reducing weight by up to 700kg compared to standard UK fridge trailers.

“The Vector 1950 MT is Carrier Transicold’s most powerful refrigeration system, creating stable cooling across larger trailer volumes, with high airflow levels, unparalleled pull-down speeds and the ability to maintain precise temperature control throughout each trailer compartment,” Cartwright said in a statement. “It also boasts impressive environmental credentials, with the patented E-Drive all-electric technology helping to reduce carbon dioxide emissions by lowering refrigerant leak rates by as much as 55 per cent over conventional belt-driven systems.”

“Following the successful integration of the New APD Fridge trailers in 2016 into our operation, Cartwright agreed to build a seed trailer for us to try,” said Fowler Welch – Head of Fleet, Paul Allera.

“The trailer performed well and we gained good feedback from both drivers and warehouse operatives.

“It was following this successful trial we decided to place an order for the 10 trailers. These trailers will run along side of others in the fleet and their performance will be closely monitored by the team,” he said.