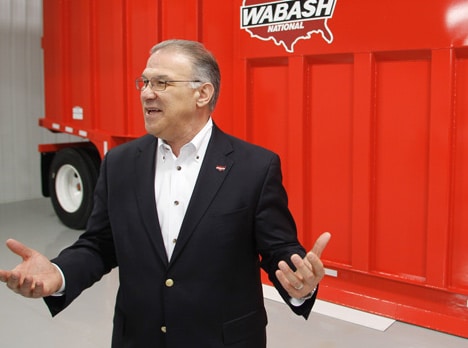 Wabash National President and Chief Operating Officer, Brent Yeagy, will become President and Chief Executive Officer, effective June 2 2018, as part of a planned succession.  To support Yeagy in his new role, Giromini will remain with the company, serving in the role of Executive Advisor through June 1 2019, following which he will reportedly retire from Wabash National.

“On behalf of the Board of Directors, I extend to Dick our gratitude and admiration for his many contributions as Wabash National’s Chief Executive Officer. His impact on Wabash National has been remarkable. The record-setting business performance, the continued development of a talented team of associates, and an unwavering commitment to integrity in all that we do will make his time of company leadership an ongoing source of pride for all who are associated with Wabash National.

“The Board looks forward to working with our next CEO, Brent Yeagy. Brent is a very talented, energetic, and experienced leader who we are confident will continue Wabash National’s growth and success,” he said.

“Working with the outstanding associates of Wabash National these past 15-plus years, including these past eleven years as CEO, has truly been a privilege and honour, and I feel blessed to have been a part of such a great organisation,” said Giromini.

“We have worked diligently from day one to effect a complete transformation of our business from top to bottom, with these efforts culminating in five consecutive years of record performance.

I extend heartfelt thanks to Dr Jischke and the rest of the board of directors for their unwavering support throughout these many years as we worked closely together in executing our strategy to convert our business into the high-performance machine that we see today.

“With this transformation now at a good stage, it’s the perfect time to step down.  I am extremely confident that Brent Yeagy is not only well prepared to take over the reins, but equipped to take our company to greater and greater heights.  I look forward to working with Brent to assure a smooth transition of leadership over these next several months and in providing him ongoing support in the year to follow,” he said.