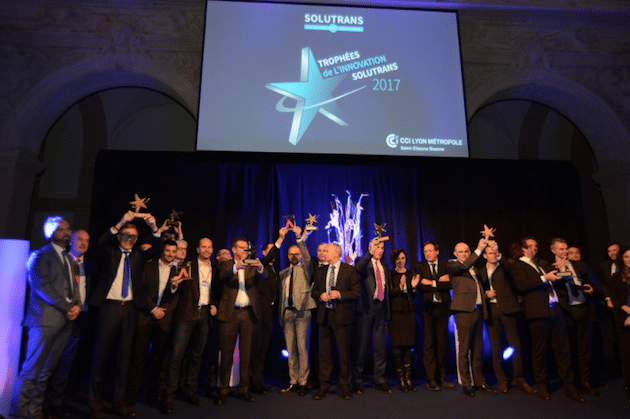 The winners of the 2017 Solutrans Innovation Awards in France have been announced.

The eight Solutrans Innovation Awards were divided into two categories: ‘Bodybuilders – Manufacturers’ and ‘Equipment Manufacturers’, with four levels of distinction for each category including gold, silver, bronze and sustainable development.

Chereau was awarded the Silver Award for an innovative telematics technology, allowing a series of functions to be automated to improve safety and operational efficiency.

The Bronze Award went to Lecapitaine for its ‘EasyAcc’air’ sectional door, which is used for the transportation and urban distribution of temperature-controlled goods.

The Gold Award in the 2017 Equipment Manufacturers category went to SAF-Holland for its SAF Adaptive Air Damping system.

“The air damping system simultaneously assumes the functions of the air spring and the damper can be integrated into the usual chassis systems in today's vehicles,” SAF-Holland said in a statement. “As a result, semi-trailers no longer need hydraulic shock absorbers.”

SAF-Holland CEO, Detlef Borghardt, said the SAF Adaptive Air Damping System “makes a noticeable contribution to optimising a trailer’s weight” with components that can save around six kilograms per axle, facilitating a higher payload.

Carrier Transicold was presented with the Bronze Award for its multi-temperatue Supra refrigerated unit for a straight truck fitted with an engine fuelled by Compressed Natural Gas (CNG), reportedly offering significant reductions in pollutant emissions.

The Sustainable Development Award went to Telma for its new generation eddy current brake with all-electronic linear control, designed for use in urban environments.

Two other accolades were awarded at the event. The Research to Business Award for Innovative SMEs was awarded to INNOV+ pour Touchango for its web-based geo-positioning and low driver attention data services. The Low Emission Driveline Award was presented to Renault Trucks for its laboratory distribution vehicle, the Urban Lab.

This year’s show recorded an unprecedented increase in visitor numbers, according to the Solutrans event organisers. “Over its five-day duration, the trade show welcomed 48,240 visitors, representing a 34 per cent increase on the 2015 show. The number of companies represented by visitors grew by 20 per cent this year.”