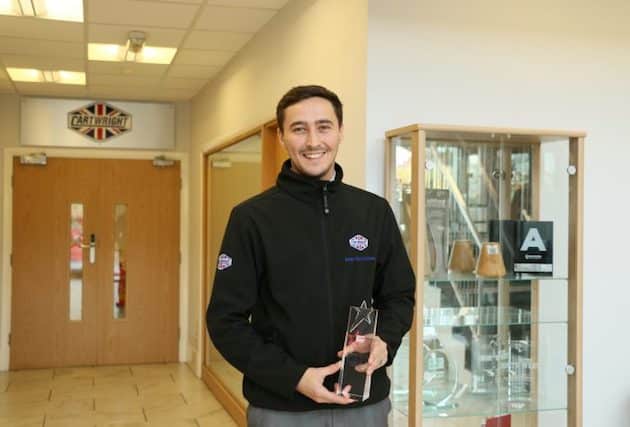 Josh Redfern of UK-based trailer builder, Cartwright, was named ‘Apprentice of the Year’ at the Commercial Motor Awards, held last month in Birmingham.

It is Redfern’s latest accolade in a string of achievements, according to Cartwright, including ‘Highly Commended’ in the EEF Awards and  ‘Apprentice of the Year’ in the Made in Manchester Awards.

The trailer builder said that since Redfern joined its apprenticeship scheme in 2012, his talent has shone through.

“He was the first Cartwright apprentice to be integrated into the design team and having now completed his four-year apprenticeship, he has joined the engineering team as a Junior Design Engineer,” the OEM said in a statement. “Cartwright’s commitment to helping all employees develop their skills to full potential has led to it supporting Josh to study for an engineering degree at Manchester Metropolitan University.”

“Joining the Cartwright apprenticeship program was one of the best things I have ever done,” said Redfern.

“From day one the experience I have gained has been just incredible. On the shop floor I became a skilled welder, coachbuilder and fitter, meeting the high-quality standards required by the business. However, after 10 months I became fascinated by the engineering design process and asked to go into the engineering office.

“I was proud to be the first Cartwright apprentice working in the design team and I found it really rewarding and very interesting. I enjoyed being a part of a close knit team and being allowed to apply my natural creativity and initiative to help drive Cartwright’s designs forward. To win such a prestigious award as a Junior Design Engineer is just brilliant and a great honour,” he said.