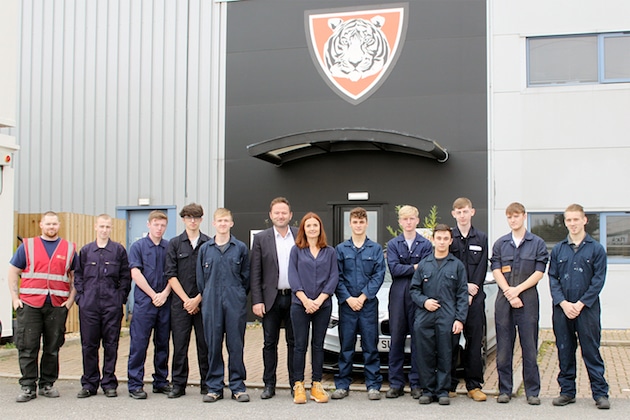 UK-based trailer builder, Tiger Trailers, is running its own apprenticeship program for the fourth consecutive year, and has also welcomed a fourth generation family member to its sales team.

When Tiger opened the doors to its Winsford factory in 2014, Joint Managing Directors John and Steven Cartwright had said that they wanted to implement a well-structured apprenticeship program, designed to nurture the best local talent from the area. To date, it has reportedly enrolled more than 30 young people to the scheme.

“We want to build a passionate, skilled workforce here at Tiger – and our apprentices are very much a part of that,” said Steven Cartwright. “We put a lot of effort into the program and are willing to invest in every single person who joins the course. It’s great to see that all the hard work our original apprentices have put in is now coming to fruition, and we’re excited to see what the next group has to offer.”

Through a partnership with Mid-Cheshire College – now Warrington & Vale Royal College – Tiger had originally offered a Level 3 Apprenticeship in Engineering Manufacturing. This year, the latest recruits will reportedly attempt a two-year, Level 2 program, removing the mostly classroom-based third year. This change in approach was built around apprentice feedback, with the majority wanting a course weighed less heavily towards the classroom that they could complete sooner. Tiger has said it will support any of its apprentices to continue to Level 3, deciding if this is necessary on a case-by-case basis.

According to Tiger, each apprentice in the program will learn the skills of the trailer manufacturing industry on the shop floor. They will also work with a mentor for four months on each of the major manufacturing stages from body building and welding through to auto electrics and pre-delivery inspection.

Tiger Trailers will soon begin construction on a new €24.9 million manufacturing facility in Winsford, UK. The new factory will also see an expansion of the company’s apprenticeship program, with a dedicated training centre included in the building design that will allow Tiger to potentially double its yearly intake, as well as offer new courses across every aspect of the business.

“The new factory and training centre will provide us with the opportunity to increase the numbers of apprentices we take on each year, as well as adding to the range of skills and courses we are able to offer,” said Steven Cartwright. “This will provide us with all the tools we will need to spearhead Tiger’s growth into the next decade.”

Jack Cartwright has said that his decision to join Tiger was initially not a straightforward one. “Like many students, when I started university I wasn’t sure exactly what career path I was going to take. All I wanted was to find a job at a forward-thinking, modern company that was really going somewhere.

“I had purposely been ignoring the obvious choice as I wanted to explore my options, but having observed Tiger’s development over the last three years the opportunity to become involved after my graduation became impossible to overlook. I wanted to be involved in a role that allowed me to work face-to-face with people, so sales seemed the perfect fit.

“I know people will look at my name, but everyone at Tiger works together and I’m not being treated any differently. The team have so much collective experience and I’m eager to learn from everyone. I really want to prove myself and be a big part of Tiger’s future,” he said.