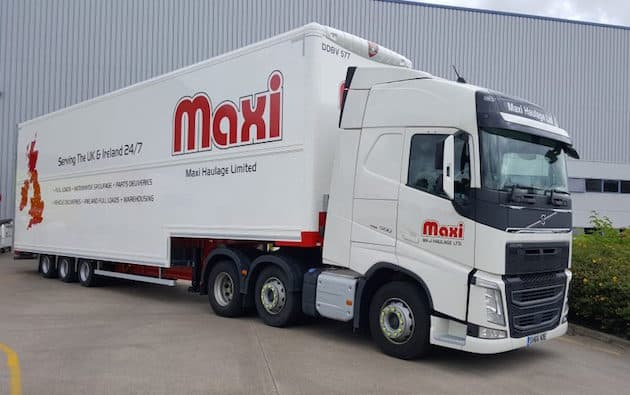 According to Tiger Trailers, the 13.6m tri-axle step frame fixed double deck trailers feature a ground-breaking design that will transform productivity for its customers delivering to the Republic of Ireland.

Tiger Trailers was reportedly tasked by Maxi Haulage to develop a solution that would offer a completely flat lower deck whilst also meeting the 4.65m Irish height restrictions – believed to be the first time such a combination has been successfully achieved.

“In the past, the 4.65-metre trailers we’ve taken to Ireland have had to include wheel boxes within the load space on the lower deck,” said Andy McGuire, Maxi Haulage General Manager.

“We wanted this to be completely flat so that we could carry more cages per load. Tiger stepped up to the challenge and the result has been an increase of seven cages, or 10 per cent. This will significantly improve efficiency and productivity for our customers, which is fantastic.”

The Tiger Trailers design also saw it move away from independent suspension, the only way such trailers were previously able to run low enough, the company said, which also made ferry loading and unloading much more difficult.

Tiger and Maxi Haulage reportedly consulted ferry companies during the development stage to ensure the new design would simplify the process.

“Tiger has been able to tick a lot of boxes with these new trailers,” said McGuire.

“We’re happy, our customers are happy, and the ferry companies are happy – it’s a win all round. When we first visited Tiger’s factory in Winsford we wanted to gauge whether they’d be up to the task; it soon became clear that they would be more than capable and they’ve risen to the challenge.”

In addition to the flat deck, bespoke elements in the design include gates on the neck of the trailers and a sloping rear floor.

The new double decks will join a fleet of 635 different trailer variants currently in operation for Maxi Haulage across the UK and Ireland.