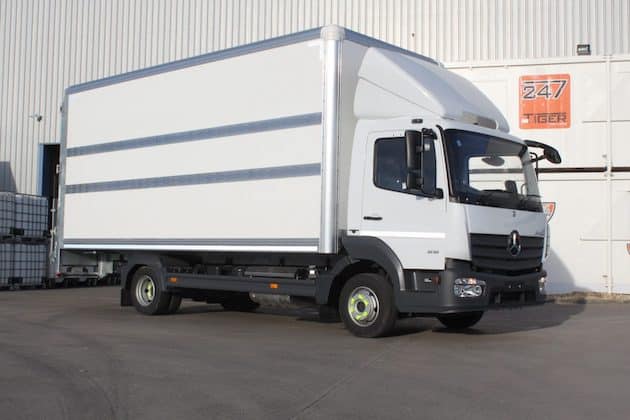 The trailer bodies are mounted to two 7.5 tonne Mercedes-Benz Ategos and two 18 tonne Mercedes-Benz Antos trucks and are the first time Howard Tenens has opted for outright ownership over contract hire – a decision reportedly based on Tiger Trailers’ ability to deliver end-to-end service at a competitive rate.

National Fleet and Compliance Manager for Howard Tenens, Richard Philpotts said: “Tiger Trailers built one of the double deck trailers we have on contract hire, so we had absolute confidence in the build quality and reliability. When combined with a very competitive price, we saw the potential for some significant savings to our operation; it made choosing ownership over contract hire a viable option.”

Tiger Trailers reportedly has an efficient and cost-effective manufacturing process that allows it to personalise each build to meet customer specifications. In this case, the rigids will primarily be used to transport vending machines, so bespoke features like internal stair-walker charging points were included, as well as large power-closure tail lifts that feature a special floor coating to ensure near-silent operation – making them ideal for handling night-time deliveries in residential areas.

“Tiger build each new body from the ground up, working with us from the outset to ensure the choices we made for each build were the right ones for our business – they even explained how they’d be helping to keep costs down. This level of service made the entire process a really positive experience, from start to finish,” said Philpotts.

The four trucks are split equally between the firm’s depots in Manchester and West London and will be on the road an average of five days a week. They are expected to remain in operation with Howard Tenens for between three to five years.
With an extensive transport network and over 1 million m 2 of warehousing facilities, Howard Tenens provides third-party logistics services to a variety of sectors, including food and drink, retail and the automotive industry.