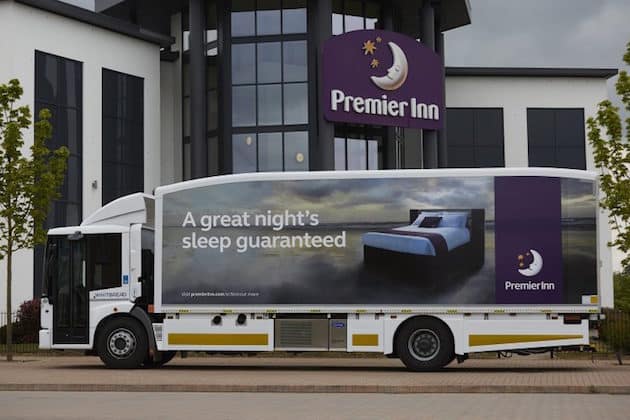 According to Carrier Transicold, the units were selected for their ability to run entirely on hydro-electric power generated by the trucks’ ultra-clean Euro VI engines – removing the need for a separate diesel engine, which helps reduce environmental impact by cutting emissions and improving fuel efficiency, whilst also reducing maintenance costs.

Both units have been specified with R452A refrigerant, which has the same cooling capacity, fuel efficiency, reliability and refrigerant charge as R404A, but offers a 45 per cent reduction in Global Warming Potential.

“After consulting with Petit Forestier, we felt it was the perfect time to put Carrier Transicold’s new engineless transport refrigeration technology to the test.”

Both vehicles are in daily operation in a busy urban environment, transporting a mix of ambient, chilled, and frozen produce to the Whitbread-owned Premier Inn chain.

The DAF CF is based in Wellingborough and delivers into Birmingham and Nottingham, both of which will include a Clean Air Zone by 2020. The Econic – which allows the driver to sit much lower than in a conventional distribution truck – operates in London, which will enforce the country’s first ULEZ, also by 2020.

“At Whitbread, we believe we have a responsibility to operate in a way that respects both people and planet, and cutting CO2 emissions from our supply chain is part of that,” said Brodie McMillan, logistics director, Whitbread.

“If these units deliver the benefits we’re expecting, Kuehne + Nagel will be looking to introduce the same technology into our delivery fleet, reducing the environmental impact of our vehicles and helping to improve air quality.”