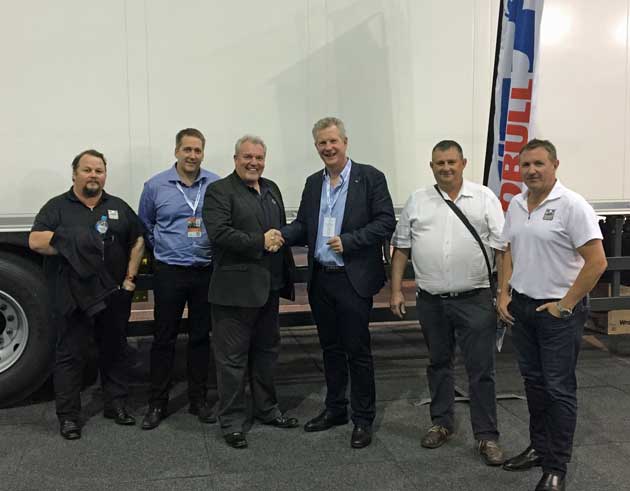 The large-scale order is said to equate to more than a third of the annual market volume for refrigerated transport equipment in New Zealand and will be used on a contract with local supermarket brand and Woolworths subsidiary, Countdown.

The deal – finalised at last week’s Brisbane Truck Show – was facilitated by Fruehauf NZ and includes nine truck and trailers bodies as well as 24 semi-trailers in a dual temperature set-up and built with Schmitz Cargobull’s patented Ferroplast panelling.

In an Asia-Pacific first, all semi-trailers will be fitted with Schmitz Cargobull’s own refrigeration unit, complete with the company’s factory telematics solution.

“The landmark sale covers about 35 per cent of the annual sales volume for refrigerated transport equipment in New Zealand, so we’re extremely proud to support the local industry in such a comprehensive way,” commented Andreas Schmitz, Chairman of the Management Board of Schmitz Cargobull, who travelled to Australia last week to help finalise the deal with Fruehauf NZ.

Tobias Hessing, General Manager of Schmitz Cargobull Australia, commented, “Our strong relationship with Fruehauf NZ has been instrumental in securing a third of the annual market volume only two months after announcing a supply agreement with Fruehauf NZ.
“We sincerely thank Jeff Mear, Sales Director of Fruehauf NZ, for securing this deal with Hall's Group.”

Hessing added, “The expansion with Fruehauf NZ into the New Zealand marketplace is a huge success for our team and a testament to the quality of the Schmitz Ferroplast product”.

He also pointed out that even minor deviations from the specified temperatures can have a major influence on the storage life and quality of foodstuffs and pharmaceutical products. As such, he said he was especially excited about the arrival of Schmitz Cargobull’s own transport refrigeration units in NZ.