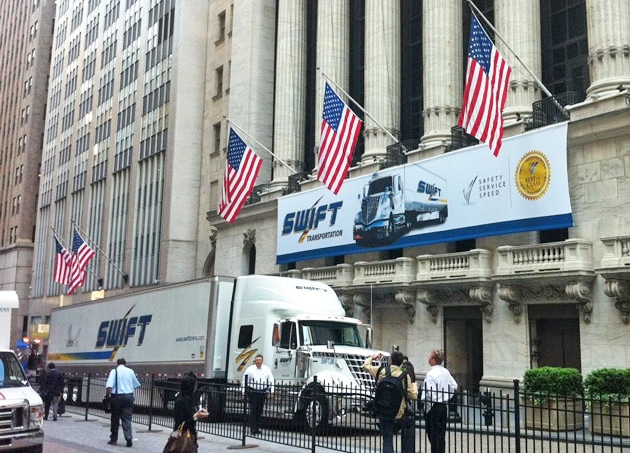 In a deal worth more than $5 billion (€4.7 billion), two of the largest transport businesses in the US, Swift and Knight, are set to merge.

According to a statement by Swift, the joint company will be named Knight-Swift Transportation Holdings (Knight-Swift) and will trade under the ticker KNX.

“This is a terrific opportunity for our stockholders, who stand to benefit from the significant upside potential of this transaction,” said Swift Chairman, Richard Dozer.

“By coming together under common ownership, the companies will be able to capitalize on economies of scale to achieve substantial synergies.

“This is an exciting chapter in the Swift story and everyone who is a part of it should be both proud of what we bring to the table and excited about what lies ahead. I am confident in this new team, in the new structure and in the future of Swift in the industry.”

Knight CEO, Dave Jackson, added, “Under this ownership structure, we will be able to operate our distinct brands independently with experienced leadership in place. We look forward to learning from each other’s best practices as we seek to be the most efficient company in the industry. We are dedicated to a seamless transition and ensuring continuity for our customers and professional Driving Associates.”