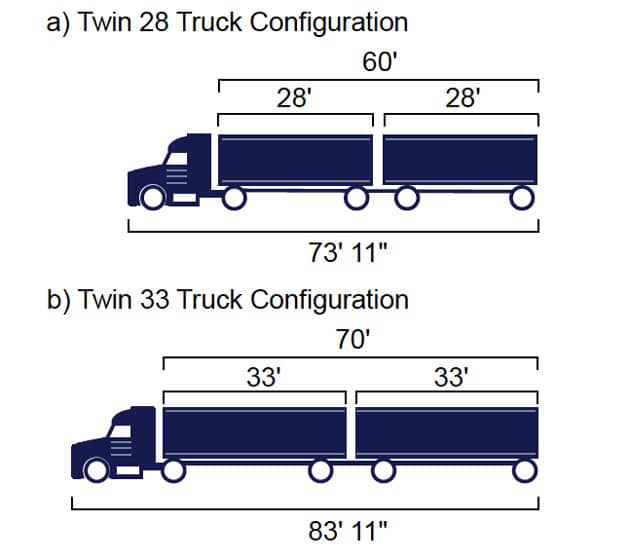 Conducted by 35-year traffic safety research veteran, Dr Ronald Knipling, the study found the new configuration has the potential to increase the stability of trailers on the road and reduce the amount of trucks needed to handle the US’ freight task.

“Shifting from twin 28-foot (ca. 8.5m) trailers to twin-33s will allow shippers to meet the growing demands of the American consumer while making transportation safer and more sustainable,” the study found.

“A shift … would result in better fuel efficiency and lower costs for consumers. The shift would save 255.2 million gallons (966 million litres) of fuel, reduce carbon and nitrous oxide emissions by nearly three million tonnes and a billion grams respectively – all while reducing shipping costs by $2.6 billion (€2.4 billion).

“These emissions reductions would be equivalent to taking 551,000 cars off the roadways. Further analysis finds a twin-33 shift would reduce congestion, decreasing total travel delay time by 53.2 million hours.”

The study pointed out that changing to a 10m design would not require a redesign of the 8.5m one already in widespread use.

The study also pointed out that while a 33-foot trailer set-up would be 13.5 per cent longer overall, its cargo volume capacity would grow by 18.6 per cent.

The double trailer set-up is currently prevalent in the US Less-Than- Truckload (LTL) market, Dr Knipling added. “When allowed, twin 33-foot trailers will be used primarily in LTL operations. Single 53-foot trailers will continue as the workhorse for truckload operations, carrying more than 97 per cent of highway freight by weight.”